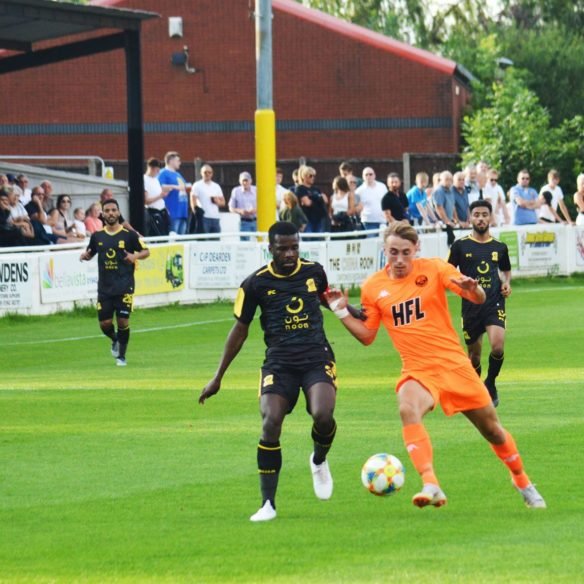 Sometimes you can do little more than let the scoreline do the talking. Atherton Collieries 2 Al-Ittihad, 8-time Saudi Ararbian champions and twice crowned the best team in Asia 0. Just let that sink in for a moment. After an afternoon that saw Colls gain nationwide attention from the likes of BBC Sport and FourFourTwo, over 700 spectators flooded to Alder House to witness a tremendous occasion, with Micheal Clegg's black and whites - resplendent in their new orange away kit for the evening - defying the bookmakers' pre-match odds of up to 14/1 to deliver a polished performance that brought a thoroughly-deserved victory against their illustrious opponents. With the hosts earning three promotions in recent years, the likes of Ben Hardcastle, Matt Grimshaw, Gareth and Josh Peet, Danny Lafferty and Jake Kenny will have become somewhat accustomed to their side breaking new ground since they were turning out at Alder House in the North West Counties League Division One, but an evening as remarkable as this would have been beyond their wildest dreams, with Al-Ittihad visiting Atherton on the back of victories against both Bolton Wanderers and Leeds United on their English tour this summer. Hardcastle had the first opening of the game on 14 minutes when he did well to evade a challenge and create space for himself in the area but dragged his shot across goal and wide of the far post, the chance giving Colls a confidence boost after initially looking a little intimidated by the possession football of their Saudi Arabian opponents. Growing more in to the game both in terms of territory and possession as the half wore on, Colls did the almost unthinkable and went in front on 32 minutes, centre back Matt Grimshaw rising highest to glance the ball inside the far post from Oliver Roberts' in-swinging free kick from Colls' right flank. A similar scenario saw Colls almost double their lead two minutes before the break, Roberts again delivering from the right hand side but this time seeing the ball agonisingly evade Ian Rowlands by a matter of inches as he looked to connect at the back post. On a warm evening that featured drinks breaks and the obligatory ice cream van, Colls were the side controlling matters and went close on 58 minutes when their sole trialist saw an effort palmed wide of the post. He would need to wait only a further two minutes, however, before doubling the home advantage, breaking clear of the defence on the left hand side of the area and showing a tremendous calmness to slot the ball inside the far post in textbook fashion. It was a two goal advantage that rarely looked troubled, the home defence staying well-organised and resolute throughout in what may well have been one of the most pleasing aspects for Clegg on what can only be described as a surreal evening. Having perhaps been given more of a test than they may have expected, it can only be hoped that Al-Ittihad fancy a rematch next summer at their at their 62,000-capacity King Abdullah Sports City home! Before any overseas visits, however, pre-season continues in somewhat different fashion next week with a visit to North West Counties League Division One side West Didsbury & Chorlton, now managed by Colls cult figure Brad Cooke, next Tuesday (30th July, 7.15pm) before Pontefract Collieries visit Atherton to contest the second instalment of The Colliery Cup on Saturday 3rd August (3pm). Atherton Collieries: Greg Hartley, Clive Smith, Gareth Peet, Ian Rowlands, Matt Grimshaw, Danny Lafferty ©, Oliver Roberts, Dave Sherlock, Tom Bentham, Trialist, Ben Hardcastle. Substitutes (all used): Toyeeb Mustahpa, Marcus Perry, Josh Peet, Niall Battersby, Jake Kenny. Goals: Matt Grimshaw (32'), Trialist (60') Attendance: 710 Photograph: Rob Clarke Match Report: Matt Lawton