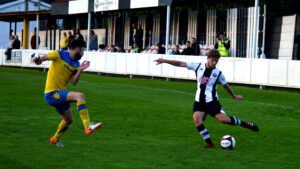 Colls suffered a disappointing 2-1 defeat against Ashton Athletic in our latest friendly encounter, with home supporters welcomed back to the Skuna Stadium for the first time in five months. With the game moved back a day due to downpours, it was a cool night for watching football on what ultimately turned out to be a frustrating game for the hosts. A first half free kick and a well-struck effort from distance in the second half handed Ashton the win after Kyle Sambor had equalised from the spot before the break. The first chance of the game fell Colls way, with Eliott Rokka stinging the palms of Ashton keeper Martin Pearson with a free-kick taken on the edge of the area. It was the visitors who took the advantage from a set piece of their own however, Harvey Whyte smashing his effort into the roof of the net with the help of a deflection from the Colls wall. It was almost two to Ashton inside the first ten minutes, doubled their lead inside the first ten minutes, Chris Bandell providing a square ball to Adam Gilchrist, who sliced his effort well wide. Colls looked to fight their way back into the game, with Marcus Cusani and Elliott Rokka both blazing efforts over the bar, before the equaliser came on the twenty-minute mark thanks to some tidy interplay between Rokka and Gareth Peet down the left-hand side. The marauding full-back made his way into the area where he was tripped and subsequently awarded a penalty, which Sambor stepped up and dispatched it with style, incorporating a skip into his run-up as he sent the keeper the wrong way. The second half continued with Colls trying to seize the advantage, another shot from Rokka sailed harmlessly over the bar before captain Danny Lafferty nodded a header just wide crossed in from a corner kick. It was Ashton who snatched the lead with a wonder-strike on the hour mark however. Colls were caught napping as the ball was played into midfield from the corner, the resulting effort was struck into the top corner from 25 yards out with Elliot Wynne unable to do anything to stop the ball sailing past him. Whilst Colls did try to mount a comeback, they looked laboured at times going forward and failed to carve out any clear-cut opportunities. Lafferty advancing from deep saw a low, driven shot deflected just wide of the post before a hooked cross in from Gareth Peet went unanswered by anyone arriving in the box. Colls finishing on the night was summed up with eight minutes left on the clock, Rokka crossing it in from the left to Jordan Darr who got his feet muddled in the box and was unable to convert from close in. Late blushes for Colls were spared when Ashton stole the ball high up the pitch and broke through on goal, their striker spurning a great opportunity to wrap up the game, meaning the final score was 2-1. In the end, a disappointing night for Colls but one that they’ll take in their stride at this stage in pre-season, with fitness no-doubt still having a part to play. The main positive on the night was the return of fans to the Skuna Stadium after such a long absence, and the team’s focus will now be on our next fixture when we travel to face Northwich Victoria on Saturday 29th. Atherton Collieries: Elliot Wynne, Clive Smith, Gareth Peet, Niall Battersby, Danny Lafferty, Rick Smith, Lewis Doyle, Ben Conway, Marcus Cusani, Kyle Sambor, Elliot Rokka. Substitutes: Jordan Darr, Danny Taberner, Danny Lambert, Vinny Bailey, Jack Bannister Match Report: Danny Brown Photograph: Rob Clarke