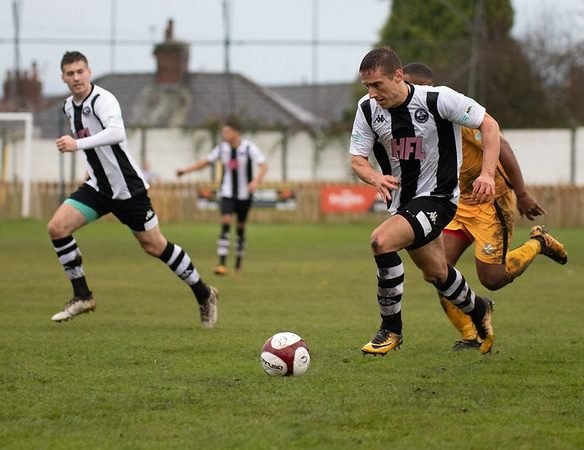 In form Basford United got within touching distance of top of the table with an efficent performance at a wet Skuna Stadium. The visitors from The Robin Hood County had the majority of possession in the opening half, their very effective striker Nat Watson put them ahead in the 13th minute when his shot got a deflection to totally wrong foot Greg Hartley between the Colls sticks.  Despite not seeing much of the ball the home team created some decent opportunities. Danny O'Brien should have levelled but perhaps hit his strike too well and it cleared the crossbar. Vinny Bailey struck a post from distance and O'Brien's weighted follow up was just off target. This let off spurned on United and following a sustained passing move James Reid finished with panache. Their third goal was route one, a lump up field saw the ball crossed to Kane Richards to joyously smash home. Jordan Cover broke the Colls modern day goalscoring record in injury time but his close range tap in was a mere consolation. There hasn't been a more clinical display in downtown Atherton for a long time and Basford United have live title credentials. For the black n white stripes it was a frustrating afternoon but manager Michael Clegg had to take a crumb of comfort with the number of chances his boys created.  After the game he graciously acknowledged  that you are sometimes beaten by a better team. A big shoutout to Jordan Cover who notched his 122th competitive goal to pass the record of his legendary strike partner Mark Battersby. A fine feat Jordan! Atherton Collieries: Greg Hartley, Clive Smith, Gareth Peet, John Welsh, Danny Lafferty (c), Josh Thompson, Ben Hardcastle (Ben Conway 70'), Michael Brewster (Dave Sherlock 70'), Tom Bentham (Jordan Cover 70'), Vinny Bailey, Danny O'Brien Goal(s): Jordan Cover (90') Rama Spice Man of the Match: John Welsh Attendance: 201