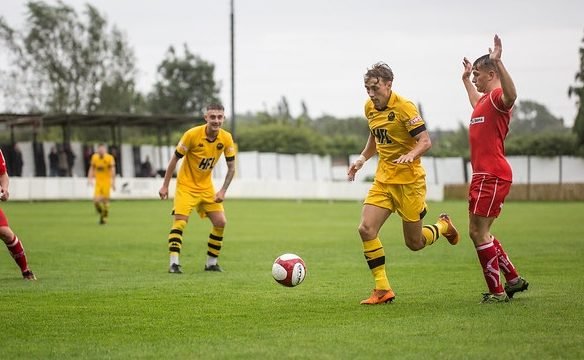 Colls final pre-season friendly saw them play out a goalless draw with Workington on a very wet and blustery afternoon at the Skuna. The Reds, relegated from the Northern Premier League last season, having played all 8 pre-season games away from home in July and August, including an international friendly against Lowland League side Gretna FC 2018. The previous week they had convincingly beaten fellow Premier Division newcomers Radcliffe FC 4-1 at Stainton Park so offered real test for Micheal Clegg’s squad. Playing in the now 3rd choice yellow stripe, the team consisted of several changes to the team that had ran out 2-0 victors at Trafford FC on Tuesday evening, the main talking point being the trailist goalkeeper. Plans were then thrown slightly into disarray as Josh Peet hobbled off on 12 minutes to be replaced by Keiran Nolan. Workington captain Scott Allison had the first shot on target of the game on 19 minutes, Trialist looking to have an assured set of hands. Centre-back Josh Calvert will be disappointed not to have tested the newcomer as his side-foot volley sailed over the crossbar on 26 minutes. The visitors left-back Liam Brockbank was causing Colls problems down their right as he performed his very best Gaz Peet impression, running with the ball at every opportunity. It was Peet himself who had Colls best chance of the game on 31 minutes when he collected a 60+ yard pass from Danny Lafferty to break through the Reds defence, only to see the outstretched toes of ‘keeper Jim Atkinson deny him. Oli Roberts, whose free kicks were providing Colls most consistent threat, also tested the keeper on 38 minutes from a dead ball The visitors' best chance of the half came just before the break as a Robbie Hebson pass somhow found its way to Allison again, Trialist down well to deny the birthday boy. As conditions worsened in the second half, fortunately the pitch was holding up, both teams had chances to open the scoring. Oli Roberts was again the main protagonist for Colls, his snapshot on 53 minutes being well tipped out by keeper for the second half Alex Mitchell. Roberts again caused problems for the Reds as his free-kick was cleared by the replacement keeper rather unconventionally. Roberts, sensing it may just be his day tried an audacious chip from just inside the Workington half on 60 minutes, fortunately for the backpedalling Mitchell, the shot drifted wide in the swirling wind. Scott Allison was again the main threat for the visitors, and Lafferty was called into action as his well timed challenge averted any danger soon after. Workington had their best chance of the game right at the dead as the marauding full-back Brockback overlapped and was able to get his shot away, the legs of Colls’ Trialist keeper ensuring the scores stayed even as with that, the referee signed that everyone could retreat indoors to safety with the final whistle. Atherton Collieries: Trialist, Battersby, G Peet, Roberts, Lafferty, Smith, Egan, J Peet, Conway, Mustapha, Sherlock Subs: Nolan, Hardcastle, Bailey