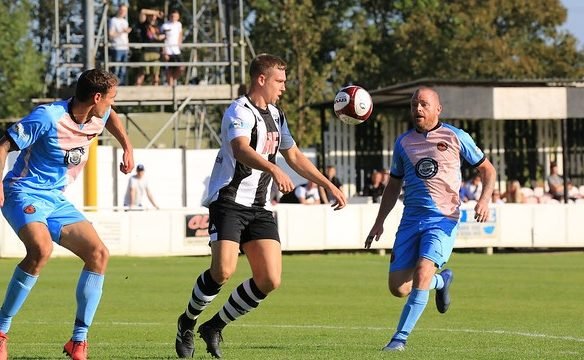 Colls welcomed Mickleover Sports to the Skuna for the first time ever, the visitors lining up with the vastly experienced frontline of Lee Hughes and Stuart Beavon, over 700 league games between them, Hughes at the ripe old age of 43! Whilst the backline was lead by the equally experienced Pablo Mills. Colls meanwhile fielded an eleven that constited pretty much of their only fit and available players. Manager Micheal Clegg keeping faith with his players on the verge of return rather than dipping into the transfer market. The game marked captain Danny Lafferty's 150th game for the club, it has been a remarkable period in the club's history and Laff has played a massive part in this, both off and on the pitch. However, it was the vast experience of the Mickleover strikeforce that was to immediately come to the fore and make that milestone a day to forget for all at the club. Colls' intitial foray into the Mickleover half was repelled, the ball switched to the left for Mason Warren to swing into the box. The movement of Beavon creating himself space to pick his spot with a deft header to open the scoring with just 43 seconds on the clock. Worse was to come on 16 minutes with a long throw-in from the left, the ball fell to the feet of arch poacher Hughes who rolled back the years to poke home and perform his trademark celebration on the six yard line. The game had been ostensibly even until this point, barring the goals. Colls' best avenue back into the game came on 25 minutes when Oli Roberts jinked past one man to get his shot away, striking the imposing frame of Mills, appeals for handball were waved away. This one not as clear cut as the FC United one which will go down in history as a howler that potentially denied the club a money spinning FA Cup tie in the next round! From here on, Oli Byrne was the busier of the keepers, acrobatically clearing from a Mills free kick on 33 minutes. Colls were then architects of their own downfall, Lee Hughes creating havoc with a ball down the right channel, Byrne saved well again and Colls started to build from the back. However, possession was relinquished and Clive Smith was caught in two minds as Mason Warren nicked the ball away then stroked it into the top corner to increase the lead to 3-0 before the break. A brighter start to the second half saw Tom Bentham immediately have his first real sight of goal on 46 minutes, however Micklover had a little bit too much know how, the movement of Beavon a constant threat. When Colls did pull a goal back through Bentham, the game had already reached the 79 minute mark, had it been earlier a barnstorming finish may have ensued. Despite an improved performance with man of the match Niall Battersby and substitutes Kieran Feeney and Dougie Nyaupembe providing some much needed energy in the searing heat, the visitors returned to Derbyshire with three points in the bag. Colls will be visiting the county themselves as we visit in form Matlock Town on Tuesday night. Atherton Collieries: Oliver Byrne, Niall Battersby, Gareth Peet, Oli Roberts, Danny Lafferty, Clive Smith, Jack Egan (Kieran Feeney 46'), Vinny Bailey, Tom Bentham, Jordan Cover (Dougie Nyaupembe 76'), Brad Lynch. Substitutes (not used): Chris Cheetham, Josh Thompson, Josh Peet Goal(s): Tom Bentham (79') Rama Spice Man of the Match: Niall Battersby Attendance: 255