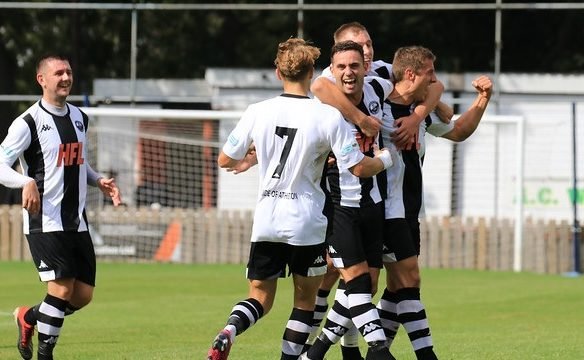 With one point from their opening three games, perhaps Nantwich Town with 9 points from 3 weren’t top of the list of opponents Colls would choose to face as they adjusted to life in the BetVictor Northern Premier Division. However, a youthful Colls side with Niall Battersby and Kieran Feeney making their full debuts were to produce a performance that maybe signified a coming of age. Facing The Dabbers for the first time since they left the North West Counties in 2006, the Cheshire side were maybe no longer accustomed to playing at such a humble venue. With young hotshot Joe Malkin drawing interest from several league clubs, it was Colls’ Vinny Bailey who took the plaudits with a first half brace as the black and whites took all three points for the first ever time at this level. The quality of the visitors was there for all to see, a 4th place finish last season an indicator of their ambitions to push for the Nation League. Colls' management opting to revert to a 5 man defence, marshalled by captain Danny Lafferty, in front of keeper Chris Cheetham. Last week’s Nantwich hero Joe Mwasile was causing problems in the middle of the park, with the threat of Northern Ireland international Jimmy Lawrie on the left ever present. Colls were to open the scoring on 21 minutes, a Ben Hardcastle ball from the right was only cleared to the edge of the box where Vinny Bailey was lurking. His shot found its way through 3 defenders to find the roof of the net, with keeper Greg Hall rooted to the spot. Worse was to come for the visitors as a Hardcastle corner was headed goal wards by Tom Bentham, only for Casper Hughes to clear off the line. However The Dabbers hadn’t learnt their lesson and Bailey was on hand at the edge of the box again, this time able to pick his spot and curl a fine effort past the despairing dive of Hall to double the lead. On 32 minutes, Bentham spotted Hall off his line and tried a cheeky effort from 40 yards, the keeper scrambling backwards could only see the ball whistle past his post. With that let off, Nantwich were to up their game and put Colls under severe pressure. Firstly Lawrie looked to have a glorious chance with acres of space on the Colls’ box but play was brought back for a handball. Then Cheetham was forced to make saves from Matthew Bell and Lawrie to preserve the lead. With the half time whistle looming, it would be Jimmy Lawrie who cut the deficit on 45 minutes. A corner ball found its way out to him on the edge of the D, his shot finding its way past Bentham and Sherlock then the despairing header of Clive Smith who had intelligently dropped onto the goal line to hit the back of the net. The second half saw chances for both sides, Lawrie’s shot on 53 minutes hitting the bar then Ian Rowlands looked nailed on the score on 62 minutes as his header sailed harmlessly over the bar. Sean Cooke looked to be finding his shooting range for Nantwich but Cheetham was equal to his efforts. Similarly, Tom Bentham saw a shot then a cheeky flick both well held by Hall. With Colls looking to kill the game off, the game sparked back into life on 93 minutes, Bentham teeing up Hardcastle in the 6 yard box with his back to goal. He opted to lay off to Oli Roberts arriving in support, evading the attention of two defenders, his left foot snapshot found the bottom corner to finally settle the game. Colls move on to their away game at Bamber Bridge on Tuesday before Saturday's big FA Cup clash away at FC United of Manchester. Atherton Collieries: Chris Cheetham, Niall Battersby (Jack Egan 63’ (Oli Roberts 83’)), Gaz Peet, Clive Smith, Danny Lafferty©, Ian Rowlands, Ben Hardcastle, Vinny Bailey, Tom Bentham, Kieran Feeney (Ben Conway 63’), Dave Sherlock. Substitutes (not used): Brad Lynch, Joseph Slinn Goal(s): Vinny Bailey (21', 27'), Oliver Roberts (90+3') Rama Spice Man of the Match: Vinny Bailey Attendance: 324 Photograph: David Featherstone