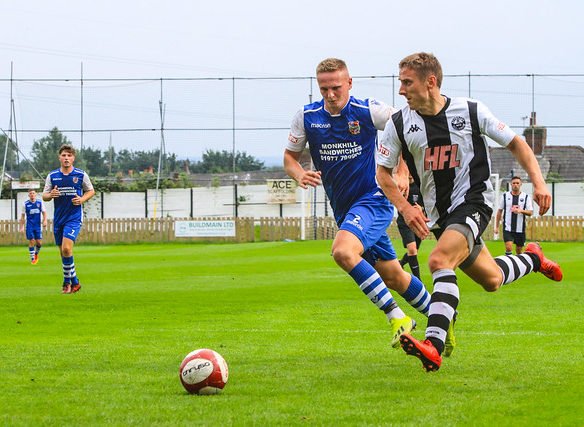 A bizarre pre-season friendly unfolded at the Skuna Stadium as the Collieries of Atherton and Pontefract faced off in the second edition of the Collieries Cup. The Yorkshire outfit had picked up the silver trophy twelve months ago with a penalty shootout win following a 1-1 stalemate. The tone of the game was set immediately after kick off as Pontefract put 100% into every kick, tackle, pass, header and shot. Clegg's team, constructed of a mix of trialists and regulars, supplied no answers. The deadlock was broken just six minutes in with a fine drilled effort from Joe Lumsden. With no real challenge, Gavin Rothery doubled that advantage six minutes later. The midfielder picked up the ball, cut through midfield and simply curled the ball into the back of the net. John Cyrus made it three minutes later, a fine header from a free-kick after outmuscling his marker again leaving Cheetham in the Atherton Colls net with no chance. Ponte’s relentlessness persisted at the grabbed their fourth on the 21 minute mark as Joe Lumsden a free header from a corner an absolute gift for the prolific hitman. Atherton were never given a chance to get going as Pontefract bossed the game physically. The second half looked hopeful for the hosts as they came out with plenty more vim and pep. Ultimately though an early dismissal hampered any against the odds fight back hopes . This was confirmed with another easy headed goal from Vaughan Redford. Redford was strong in attack, and with a lobbed goal the attacker got his second and Ponte's sixth. Despite the numerical disadvantage the black n white stripes dug in and pulled one back with seconds of the game left. Gaz Peet masterminded a run into the area, and crossed the ball for a trialist to fire home. A strange performance from the reigning NPL Division 1 West Champions which manager Michael Clegg will get to the bottom of. The visitors returned to the White Rose County with the Collieries Cup deservedly still in their grip. They put in an ultra competitive yet skillful display which will surely have them marked down as one of Bet Victor North East Division title protagonists.