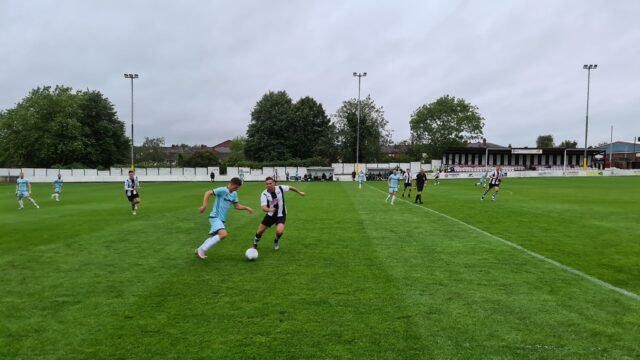 Colls were defeated 4-1 against League One outfit Rochdale at the Skuna Stadium. The preseason fixture was the first time the two teams have met, with the visitors superior quality showing despite a spirited performance from Colls. A brace from Newby and goals from Ryan and Done gave Dale their victory, with Elliott Rokka pulling one back from the spot for Colls in the first half. The game saw Danny Taberner facing off against the side where he made his debut, and the man between the sticks pulled out a string of impressive saves against his former side. Colls started the game slowly and were quickly punished, Rochdale’s Mulvey able to pick out Alex Newby whose low shot beat Danny Taberner, putting the visitors ahead inside two minutes. Things got worse for Colls just minutes later, Rochdale’s Jimmy Ryan firing in a rocket from 25-yards to make it two to the visitors. With the home side looking to fight their way back into the game, some tidy footwork from Elliot Rokka saw him tripped inside the box on twenty minutes, the referee pointing to the spot, The midfielder stepped up himself and cooly dispatched the spot kick, sending the keeper the wrong way to restore some hope for Colls. Any hope was short-lived however, Dale’s Matty Done managed to beat the offside trap and square it to Newby who added his second, restoring the deficit. The lead could have been more soon after, Danny Taberner pulling off a stunning double save to deny his former side. Colls managed to fashion a couple of half-chances before the break, the best of which seeing Jordan Darr March onto a searching ball from Rokka, his low shot not troubling the Dale keeper. Taberner made another impressive stop just before the break, diving low to the left-hand side to turn a strike from Done around the post. The second half saw the visitors extend their lead further, Tavares nicking the ball past Elliot Wynne who caught the attacker and gave away a penalty. Aaron Morley stepped up and converted from the spot to give Rochdale their fourth. From there the game petered out, with neither side able to carve out any clear opportunities. In the end, a tough run-out for Colls against a strong side but a performance they will take heart from as they look towards their next fixture against Warrington Rylands on Saturday. We would like to wish Rochdale the best of luck for the upcoming season, and we would like to thank all supporters who bought a ticket to stream last night's match, your support is much appreciated. Match Report: Danny Brown Photo: Joseph Gibbons