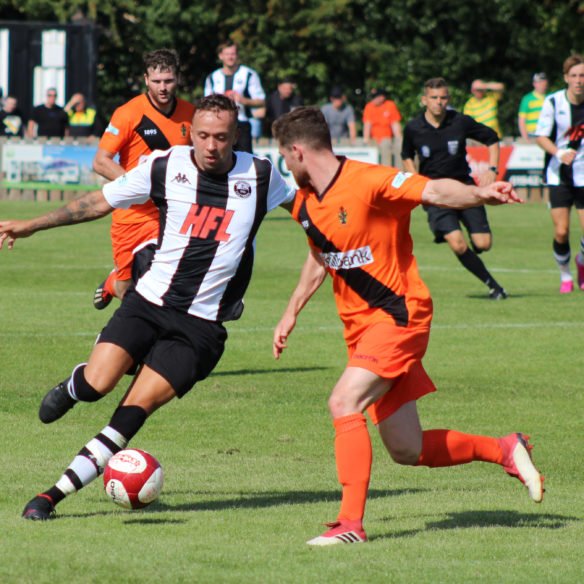 The Colls returned to FA Cup action, desperately seeking a glamorous run in a competition that they haven’t progressed beyond the Second Round Qualifying in since 1994/95! Opponents Runcorn Linnets a regular visitor to the Skuna in both league and cup meant a very tentative start as both teams knew exactly what to expect of one another. It took 20 minutes for either team to have a shot on goal, Colls young winger Brad Lynch looking to build on his great start to the season latching on to a loose pass from Peter Wylie, jinking past centre-back Alistair Brown and pulling a great save from ‘keeper Bayleigh Passant. The Linnets keeper arriving recently on loan from Tranmere Rovers. Much of the play was Colls looking to patiently isolate the Linnets defence, Sherlock linking up the midfield as full-back Clive Smith and Jack Egan making his full debut on the right caused problems. With Colls’ keeper Theo Robert still to be really tested, Colls had 2 chances before the break to open the scoring. Firstly Vinny Bailey on his 100th game for the club dribbled the ball into the box, sent Brown for a hot dog not once but twice before his shot was blocked, claims of handball waved away. Then a Gaz Peet ball over the top lead to confusion in the Linnet’s ranks as full-back Louis Corrigan casually tapped a pass back to Passant, Cover immediately reacting, unfortunately the ball bobbled off the striker enabling the keeper to eventually collect. Half-time saw a double substitution for Colls with Tom Bentham returning for Cover and Oli Roberts replacing Dave Sherlock, manager Micheal Clegg clearly having on eye on bank holiday Monday’s trip up to Lancaster City. Colls started the second half brightly as Ben Hardcastle was barged off the ball, free-kick specialist Oli Roberts seeing his effort tipped wide from Passant. His corner was heading to Ian Rowlands who had lost his marker at the far post. Remarkable, the faintest of touches from Passant's finger tips meant the defender could only head across the box with the goal at his mercy. Louis Corrigan had another moment to forget on 65 minutes when he mis-controlled a bouncing ball on the byline to allow Lynch a run on goal, with Linnets’ heads in hands, the energetic winger could only pull his shot wide with Bentham arriving in the box. The opening goal did arrive in 68 minutes, Ben Hardcastle starting a move that saw the ball played out to Lynch on the left, via Bentham, Hardcastle arriving in the 6 yard box to smash the ball into the roof of the net. This only served to spark Linnets into action and after showing more attacking intent they were rewarded with an equaliser on 83 minutes, full-back Wylie whipped a ball into the box and former Colls man Paul Shanley’s glancing header left Theo Roberts with little chance. With thoughts of a replay on both teams' minds, the game defining moment came in the 91st minute. Roberts in the middle of the park played the ball out wide to Gaz Peet. Going past one man with ease, he drove into the box, centre-back Alistair Brown unable to contend with the changes of direction opted to back off, offering Peet the chance to drill the ball across the goal into the far corner to put Colls 2-1 up. Rather than sit back, not the Colls way, Tom Bentham pinched the ball off Nicholas Ryan and forced Passant in to a save down low to tip the ball onto the post, both teams now looking drained by the blazing heat. And with that, the final whistle signalled it would be Colls who progress into the First Round Qualifying of the Emirates FA Cup. Atherton Collieries: Theo Roberts, Clive Smith, Gaz Peet, Dave Sherlock (Roberts 46’), Danny Lafferty©, Ian Rowlands, Jack Egan (Conway 57’), Vinny Bailey, Jordan Cover (Bentham 46’), Ben Hardcastle, Brad Lynch. Substitutes (not used): Jake Kenny, Matt Grimshaw, Niall Battersby, Chris Cheetham Goal(s): Ben Hardcastle (68'), Gareth Peet (90+1') Rama Spice Man of the Match: Gareth Peet Attendance: 252