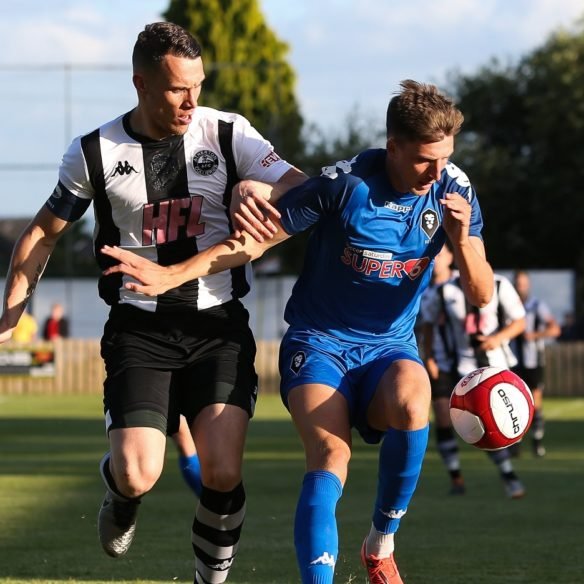 A hastily arranged friendly with now League Two side Salford City saw Colls return to action earlier than expected, and with all due respect, facing the most difficult challenge of their pre-season. Salford able to name two entirely different teams in each half whilst Colls made a raft of chances in the second half after starting with a very familiar line-up. The only new signing on view was Keiran Nolan, in for the holidaying Danny Lambert, anchoring the midfield. Defensively, a back 5 was maybe an acknowledgement of the threat Salford posed. Salford started brightly and pegged the Colls back in their own half, both teams still tender from early pre-season training sessions. Richie Towell was the main protagonist early on for Salford with the threat of Adam Rooney every present. Ben Hardcastle was the first Colls player to threaten for Colls, a smart reverse ball from Tom Bentham presenting a sight of goal which was quickly snuffed out by the twin towers of Nathan Pond and Sam Adetiloye. Greg Hartley was called in to action on a number of occasions, a stunning double save from Towell and Danny Lloyd was followed up by equally impressive effort to deny Jake Beesley. With Salford penning Colls into their own half, and the full-backs unable to offer an attacking threat, the only support for Bentham leading the line valiantly was the willing running of Hardcastle. When in possession of the ball, playmaker Vinny Bailey was being denied options, Bentham being superbly marshaled by the experienced Pond. That man Hardcastle was the first to offer a threat to Chris Neal’s goal just before the half hour mark, the experienced keeper not troubled by his shot from outside the box. Five minutes later, Oli Roberts spotted Neal marginally off his line and attempted to emulate one of the Salford owners with a shot from the half-way line, unsuccessfully. As we approached the half-time whistle, following another Hartley save from Danny Lloyd, Colls had their best chance of the game. Hardcastle was tracked down the right by Dan Jones, the ball broke to Clive Smith who stood a glorious ball up between the Salford defence that Tom Bentham could only get the top of his head on. Inches away from being the perfect ball. And with that, referee Darren Handley ended the half, Colls doing very well to keep out the visitors. For the second half, Colls almost traditionally kicked up the slope, that in the blistering heat combined with facing eleven pairs of fresh legs meant they were again under the kosh. Tom Bentham had Colls only meaningful opportunity on 60 minutes with a shot across goal that sailed harmlessly wide with the Salford hitman finding some very rare space in the box. With that, Colls themselves made a number of changes but spent the rest of the game defending stoutly. The legs of Salford finally told on 85 minutes when former Bolton man Oscar Threlkeld was gifted the freedom of Alder Street to advance unchallenged and dink a ball into the box for Mani Dieseruvwe to run on to and lash home to score the only goal of the game. Both teams seemed content with a good run out, getting fitness in the legs without any injuries incurred and retired to the changing rooms for their recovery pizzas. We continue our pre-season with our original scheduled first game of the season away at Prestwich Heys on 6th July 3pm. Photograph courtesy of Charlotte Tattersall/Salford City @CBTPhotography