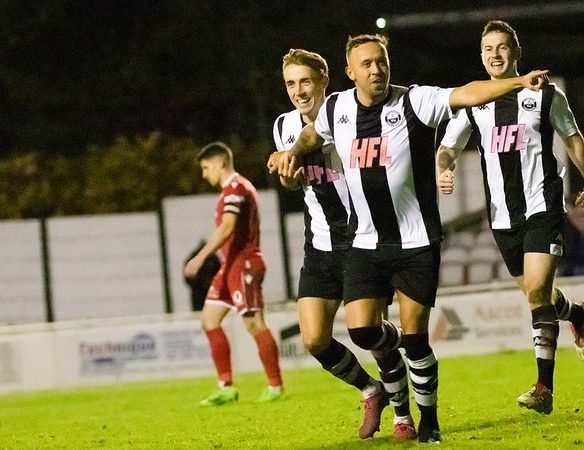 Scarborough first visited Atherton in March 2018 when they were dispatched out of the Integro Cup on a Thursday night then less than 48 hours later left empty handed in the league. They were however to take one of the automatic promotion places and progress to the Premier Division. The draw for the FA Trophy meant that again they would face two trips to M46 in the league and cup this season. The game being hurriedly scheduled for Tuesday night after a deluge put paid to the original date at the weekend, along with a large part of the football calendar. Colls lined up with the returning Greg Hartley between the sticks and Ben Hardcastle starting his first game since early September due to injury. Danny Lafferty also returning to the team, partnering Josh Thompson in the middle of the defence with Michael Brewster and John Welsh the midfield generals, Bens Hardcastle and Conway providing the width. The first half passed almost without incident as the teams went down the tunnel at 0-0, there was little to hint at the goalfest that was to soon arrive! Both teams started the second half with the words from their managers ringing in their ears, James Walshaw bringing a close range block from Clive Smith almost from the off, to frustration of the visiting supporters. However it would be Colls who would open the scoring soon after, Tom Bentham with the ball near the corner flag hit a cross between the two centre-backs and Jordan Cover reacted like lighting to angle the ball into the bottom corner of the net and celebrate equalling Mark Battersby’s modern day goal scoring record. The hitman Walshaw wasn’t however to be denied his goal though as on 55 minutes he dived through the Colls’ defence to get his head to a Chris Dawson cross to level the game. One of the most potent weapons in the Colls’ arsenal is a Gaz Peet run into the box, and on 72 minutes, Peet overlapped Dan O’Brien, collected a Michael Brewster ball and bore down on goal only for young defender Kian Spence to catch the tricky Wiganer’s legs as the referee pointed immediately to the spot. Tom Bentham stepping up and sending Tommy Taylor the wrong way to restore the lead. The game looked to be wrapped up on 84 minutes when Bentham laid an O’Brien cross into the path of Ben Hardcastle, in acres of space in the Scarborough box, last year’s Division Player of the Year coolly slotting home with his left foot. Scarborough however weren’t yet finished, and they must be credited for their spirited comeback. In injury time, substitute Luke Lofts benefitted from a fortuitous rebound to produce to sublime finish, curling the ball around Hartley. And with 3 minutes of the game still to be played, Scarborough threw everything they had at the Colls’ backline. However the defence stood firm to clinch the win and book a date with Morpeth Town at the Skuna on Saturday 9th Nov in the next round of the competition. Atherton Collieries: Greg Hartley, Clive Smith, Gaz Peet, John Welsh, Danny Lafferty, Josh Thompson, Ben Hardcastle, Michael Brewster, Tom Bentham, Jordan Cover (Danny O’Brien 61'), Ben Conway (Vinny Bailey 61'). Substitutes (not used): Niall Battersby, Ollie Byrne Goal(s): Jordan Cover (47'), Tom Bentham (penalty 74'), Ben Hardcastle (84') Rama Spice Man of the Match: Gareth Peet Attendance: 212