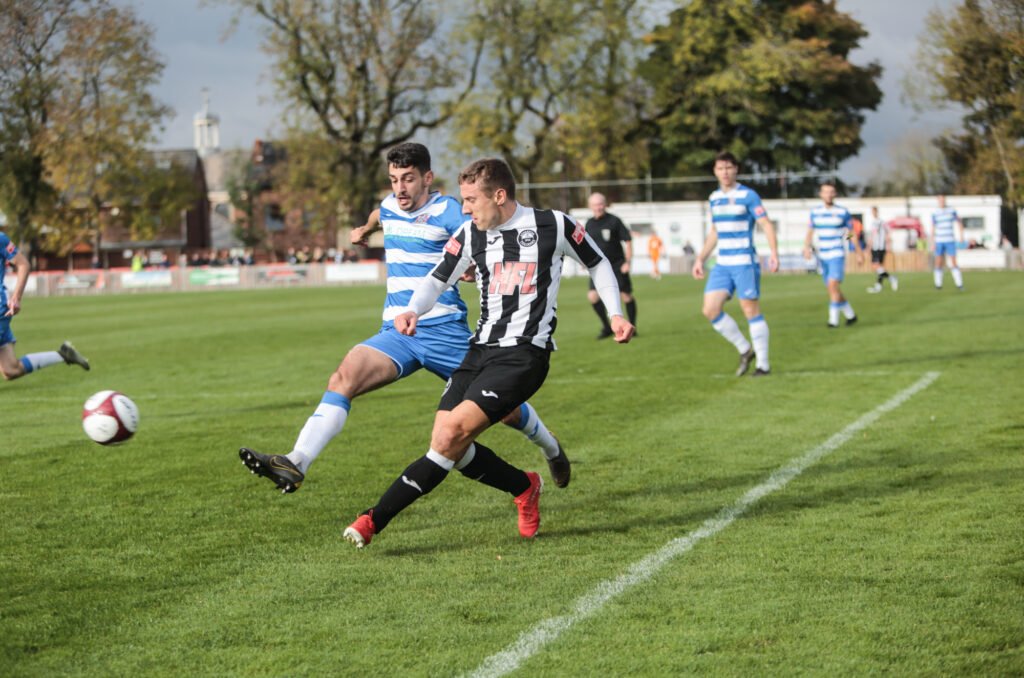 In an entertaining contest Colls were unable to make it two wins in two as they played out a lively 1-1 draw at home to Stalybridge Celtic. Marcus Cusani saw his first half goal cancelled out by a strike from Stalybridge’s Will Goodwin, with the keepers coming out on top in the second half.
The first chance of the afternoon fell to visitors inside five minutes, with Jon Ustabisi racing down on goal and poking it through to teammate Nico Evagelinos with a great sight of goal, however Danny Taberner was on his toes and quick off his line to smother the shot. It was Colls who went down the other end to seize the advantage, Marcus Cusani latching onto a under-hit back pass from the Stalybridge defence and finishing first time past the stranded keeper to give the home side the lead and get himself off the mark for the season.
The chances continued to flow throughout the first half, some brilliant interplay between Dylan Glass and Eliot Rokka saw the former able to get a shot off inside the box, but Tom Stewart in the Stalybridge goal got down well to save at the near post. It was Danny Taberner on hand to deny the visitors again as his own poor clearance saw Evangelinos with another chance denied from close range before Callum Harris’ rebound was acrobatically tipped over the bar by the sprawling keeper.
There was nothing he could have done about Will Goodwin’s equaliser just moments later however, as the Stalybridge No.9 was afforded the space to drive towards the Colls goal and unleash a powerful strike into the top corner from just outside the area. Eliott Rokka stung the palms of Tom Stewart and Will Goodwin fired another shot just wide of Danny Taberners post before the half time whistle came, perhaps surprisingly the sides went into the break with just two goals scored.
The second half was less open than the first but still saw a handful of chances for either side. A sliced pass from Danny Taberner on the hour mark saw Jon Ustabisi bearing down on an empty net but Clive Smith was on-hand to make a crucial sliding tackle, saving his keeper’s blushes. A perfectly-timed tackle at the other end from Matty Makinson stopped Elliot Rokka from getting clean-in on goal after he was played in by Jordan Darr.
Colls grew into the game as it went on and pushed hard for a winner in the second half, with a glancing header from Rick Smith almost catching the keeper out at the near post. It was the visitors who came the closest to a winner however, a close-range effort from Jon Ustabisi rattling off the post. Jordan Darr, on from the bench had the chance to steal the points with just five minutes left, racing in one-on-one with the keeper but he was unable to poke his effort home.
In the end a fair result and a deserved point for the Colls, who have now taken seven points from their opening five and are currently sat in eleventh place, with a game in hand. Speaking after the match Colls manager Brad Cooke said: “I was disappointed with the first half performance, we looked tired and sloppy in possession. That being said, we still should have scored a couple more goals.”
"Second half I thought we were more on the front foot and should have won the game, the amount of balls we got out wide and into the box but couldn’t get on the end of. We’re disappointed not to get the three points but on reflection a draw is probably a fair result."
Colls are next in action on Tuesday as they face Bamber Bridge in the latest in a busy schedule of games at the Skuna Stadium, ticket information for that game will be made available shortly via our social media channels.
Atherton Collieries: Danny Taberner, Clive Smith, Gareth Peet, Danny Lambert, Danny Lafferty, Rick Smith, Jack Banister (Ben Conway), Vinny Bailey, Dylan Glass (Jordan Darr), Elliot Rokka, Marcus Cusani
Goal(s): Marcus Cusani (6')
Rama Spice Man of the Match: Clive Smith (Sponsored by M Riley Plumbing & Heating)
Attendance: 360 Report: Danny Brown Photo: David Featherstone