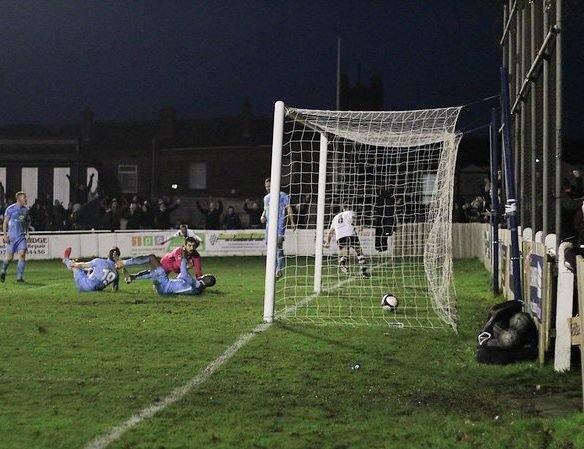 In a game that was dubbed as one of the biggest in the Collieries' history, Boston United made the journey west to the Skuna Stadium. This was the the third qualifying round of the FA Trophy, the furthest the Colls had ever reached. And Boston United were an opposition of non-league fame, being a Football League club as recently as 2007. This didn't daunt Clegg's men as they were ready for this encounter. An attacking side headed by Tom Bentham remained largely unchanged from previous Atherton starting elevens. For Boston, though, minds were on a huge FA Cup encounter with Rochdale seven days later. The first half was an even affair as both sides shared possession politely. This was epitomised beautifully on eleven minutes, both sides hit the woodwork one after another in a remarkable 60 seconds of action. It was the visitors who first warmed the woodwork, Pierce Bird flicking the ball against the post from a deep United corner. Counter-attacking from this, a ball across to Ben Hardcastle rebounded almost instantly as the winger drove the ball straight at goal. Creative midfielder Vinny Bailey provided the only other real effort of a quite tame half of football. In a similar move to Hardcastle's earlier near miss, the ball was cut across to Bailey who fired a low and hard shot across the box and towards the bottom left hand corner. Alert, Boston stopper Peter Crook met it with a fine save to tip behind the goal. Half chances came and went as the first period drew to a close. Only one thing was obvious going into half time and that was something special was required to break the deadlock between the two sides. Both sides came into the game a lot more in the second half, earlier threats from Gaz Peet were repelled as United's defence refused to let anything slip through. In truth, Boston took the game to Colls a bit more as the fifth-placed National League North outfit pressed continuously. Substitutions, though, from Clegg saw Dave Sherlock, Danny O'Brien and Danny Lambert introduced into the game and a new-found strength in midfield. On 71 minutes Hardcastle showed promise as he broke into the United area. As he cut inside he hit a direct ball across the face of goal. Frustrated, the winger could only watch on as it tickled away for a goal kick. As a replay loomed both sides, again, stepped up their attacking moves but a goal just didn't look likely. Hartley made a fine save with just eight minutes left on the clock. Shaun Tuton unleashed a ferocious effort from sixteen yards out, Hartley dived to his right and partied away from danger with a strong hand. The game changed from here as Atherton attacked and attacked. On 88 minutes the deadlock was finally broken and a cup upset was on the cards. In a packed out Boston box, Gaz Peet sent a pin-pointed ball to the feet of Michael Brewster. The eventual man of the match slotted the ball into the back of the net as he remained calm and collected under the pressure of the Boston United defence. A stylish finish to top a stylish performance. Queue roaring scenes of celebration across the Skuna. This was to be the all important goal that saw Atherton Collieries beat Boston United and subsequently knock them out of the FA Trophy. Another milestone reached for Clegg and his management team as they matched the promotion-chasing National League North team throughout. Who knows which team Atherton will face in the next round? One thing is for sure, the Colls will be ready and waiting. Atherton Collieries: Greg Hartley, Clive Smith, Gaz Peet, John Welsh, Danny Lafferty, Niall Battersby (Danny Lambert 80'), Ben Hardcastle, Michael Brewster, Tom Bentham, Vinny Bailey (Dave Sherlock 63'), Ben Conway (Danny O’Brien 63'). Substitutes (not used): Steve Kipre Goal(s): Michael Brewser (87') Rama Spice Man of the Match: Mike Brewster Attendance: 303 Report: Zach Pierce