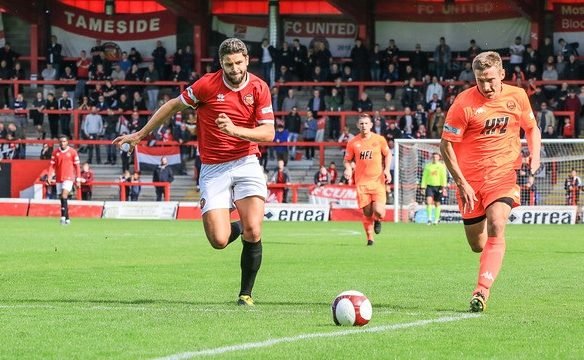 When Colls and FC United of Manchester were the first two balls out of the velvet bag, Colls knew they had already nabbed the glamour FA Cup tie that they’ve been hankering for over the years. The Red Rebels playing in a new custom build facility close to the Newton Heath area of Manchester in front of crowds pushing the 2,000 mark. Before the game, manager Micheal Clegg predicted a terrific cup tie with two teams going toe to toe, and so it was to play out in front of over 1200 spectators. FC twice took the lead, only for Colls to peg them back, having a very tight offside decision go against them to deny them a lead at 2-2 before weathering an injury time bombardment. A bright start saw Colls first attack in an end to end half, captain Danny Lafferty’s tame header easily dealt with. Last week, Paul Ennis and Tunde Owolabi both grabbed a brace for FC and the pair combined again on 8 minutes, Owolabi teeing up Ennis, only for him for drag his shot wide. The towering frame of centre-back Tom Dean caused Colls problems from set-pieces all day, his clear header on 17 minutes a warning of what was to come. Colls' best chances of the half came in a 5 minute spell midway through the half, first Gaz Peet was chopped down on the edge of the box, Vinny Bailey’s free kick easily gathered Paddy Wharton in the goal. Minutes later, Wharton was beaten to a Peet cross by Tom Bentham sliding in at the near post. Somehow the ball flew over the bar with the unguarded net gaping. Colls were to rue that miss just after the half-hour mark as Tom Dean connected with another corner. With Owolabi hovering, Colls desperate attempts to intercept only served to direct the goalbound header into the net to open the scoring. A tactical reshuffle at half-time saw Colls revert to a 4-4-2 formation, Ben Hardcastle hobbling off earlier to be replaced by the energetic legs of Brad Lynch. And it was to be Lynch who was to be instrumental in levelling the game. Collecting the ball in the FC half, he laid off to Tom Bentham and ran through the middle of the split defence, Bentham’s intelligent reverse ball perfectly placed into the path of Lynch who composed himself to coolly slotted home 10 minutes after the break. Parity was to be short lived as an FC free kick deep in Colls' half on 59 minutes was headed in by Dean again, the big defender now being attributed the opener too, to restore FC’s lead. On 76 minutes it was Colls’ turn to cause chaos in the box from a corner. Jack Egan's delivery was headed on by Lafferty then snapped up and despatched by fellow defender Clive Smith to silence the FC fans gathered behind the goal and level the game again. However, FC were straight on the attack and again, Tom Dean got his head to a corner, this time off target to allow Colls to settle. Minutes later came the moment of controversy, substitute Jordan Cover released down the right crossed to the back post, Brad Lynch arriving with a perfectly timed run stabbing home, only for the linesman’s flag to pop straight up. Video evidence being unclear, the decision was very tight indeed and certainly no benefit of doubt being applied to deny Colls the lead. The game then see-sawed as both teams hunted a potential winner, in the final minutes it was FC who applied the pressure. The final phase of play saw Danny Lafferty throw himself in the way of a shot, in amongst a crowded penalty area to avert the last bit of danger and to take the tie back to Atherton. The replay will be played at the Skuna on Tuesday 10th September, 7.45pm. Atherton Collieries: Oliver Byrne, Niall Battersby, Gaz Peet, Danny Lafferty, Clive Smith, Ian Rowlands (Brad Lynch 46'), Ben Hardcastle (Jack Egan 33'), Vinny Bailey, Tom Bentham, Ben Conway (Jordan Cover 69'), Dave Sherlock. Substitutes (not used): Oli Roberts, Keiran Nolan, Chris Cheetham, Kieran Feeney Goal(s): Brad Lynch (56'), Clive Smith (76') Rama Spice Man of the Match: Danny Lafferty Attendance: 1,216