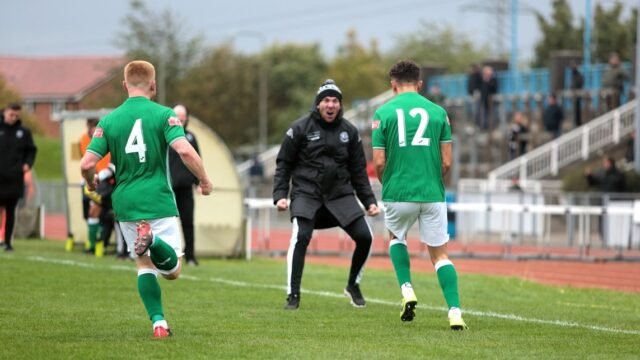 Atherton Collieries claimed their first three points of the Northern Premier League campaign with a 2-1 win away at Grantham Town. Kyle Sambor’s 86th minute penalty sealed the victory after Gareth Peet’s first-half free kick had been cancelled out by a strike from Grantham’s Niall Doran. Colls started the game brightly - looking to bounce back from last weekend’s home defeat to Scarborough Athletic - and were unlucky not to be ahead when Rick Smith’s flick on fell to Jordan Darr whose volley went narrowly over the crossbar. Smith was then involved again just two minutes later as the central defender saw an effort of his own saved well by Jan Budtz in the home side’s goal. Brad Cooke’s men were dominating the game and were unlucky not to get the first goal of the contest through Clive Smith. He rose highest to meet Vinny Bailey’s corner and head towards the top corner of the net, only for it to be cleared off the line by a Grantham defender. With pressure mounting on their goal, the home side started to become disgruntled and their frustration boiled over on the 41st minute with a late challenge on Ben Conway. From the resulting free kick, the travelling Colls faithful witnessed a touch of magic from Gaz Peet. 25 yards out, he curled the ball around the Grantham wall and into the top corner of the net, an unstoppable strike. With this, Cooke and his team headed in 1-0 to the good at half-time with the home side still yet to test Danny Taberner in the Colls’ net. As the wind blew around the ‘South Kesteven Stadium’, the second half began, and Grantham gradually worked their way into the game. Taberner was called into action, doing well to tip a shot from Ben Middleton around the post and claiming the ball from the resulting corner, in increasingly blustery conditions. Danny Lambert then looked to double Colls’s advantage with a powerful drive forward from midfield, but his shot was unable to trouble the ‘keeper. ‘The Gingerbreads’ drew level on the 68th minute mark, as Nathan Dyer’s low cross fell to the feet of Niall Doran in the box. His prod towards goal deflected off the foot of an Atherton defender and went into the back of the net. Cooke’s response to the equaliser was instant, bringing Jack Banister on from the bench in place of Elliot Rokka, and the substitute almost repaid his manager’s faith immediately. Marcus Cusani’s drive at goal from a free-kick was spilled by Grantham’s ‘keeper and Banister was first to the rebound. He flashed the ball back across the face of the goal, but no one was able to connect with the ball. It was to be another substitute that stole the show for Colls though. With just five minutes to go, Gaz Peet went on one of the low drives into the box that the Colls fans have become so accustomed to over the years. He was bundled over in the area and the referee pointed to the penalty spot. Substitute Kyle Sambor was on hand to seal the victory as he stepped up and kept his cool, smashing the ball past Jan Budtz to spark scenes of jubilation from his teammates, the bench and the supporters. The final whistle was sounded, and a well-deserved three points headed back to Atherton with the team. Our next match is this coming Tuesday – September 29th – away at Warrington Town. Atherton Collieries: Danny Taberner, Clive Smith, Gaz Peet, Danny Lambert, Danny Lafferty, Rick Smith, Ben Conway (Ellis Roberts), Vinny Bailey, Jordan Darr (Kyle Sambor), Marcus Cusani, Elliot Rokka (Jack Banister). Substitutes (not used): Dylan Glass, Niall Battersby Goals: Gareth Peet (40'), Kyle Sambor (penalty 85') Man of the Match: Gaz Peet (Sponsored by Tomlinson Tax Returns) Attendance: 231 Match Report: Ben Olawumi Photography: David Featherstone