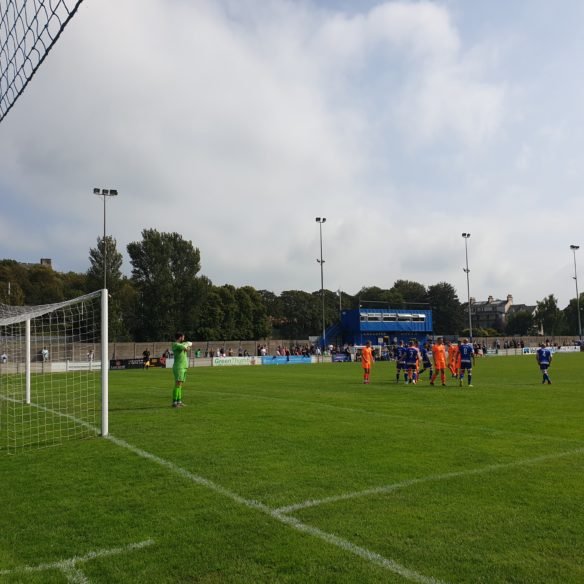 Atherton Collieries played competitively against Lancaster City for the first time since an FA Vase clash in 1986. The Dolly Blues came out on top 1-0 on that occasion and it was the same result this time around with David Norris grabbing the winner in stoppage time. Collieries had moments of promise in the first half, taking the game to their hosts. Ben Conway close to finishing off a quick move as he curled an effort narrowly wide of Sam Ashton's post after just three minutes. Theo Roberts in the Colls goal was called upon on a number of occasions and he pulled off some crucial saves. On 12 minutes, Sam Bailey rattled a free-kick towards the top corner at pace and Robert's managed to tip over the crossbar. Colls, in their luminous orange kit, should have opened the scoring when Tom Bentham flicked the ball on to Ben Hardcastle in the area. Under pressure, the forward fired at goal and looked to have scored but a last ditch tackle on the line kept the score goalless. Lancaster dominated the remainder of the first half and it was Bailey once again who forced Roberts into a smart save, pushing the ball out for a corner. Former Leeds United forward Norris then side footed an effort wide of the right hand post. Following the interval, Collieries appeared to play with more freedom and intent. Gareth Peet was able to create a number of openings and his fellow defenders became involved in a physical battle against the City frontline. Ben Conway found himself pacing down the wing before Lancaster defender Simon Wills committed a cynical foul to halt the attack. The home fans, who were stationed in the shed behind the far goal, were celebrating on 77 minutes when the ball hit the back of the net but referee Raper ruled the goal out for what appeared to be a foul committed on a defender. Collieries sensed they could snatch all three points and brought on Niall Battersby, Jordan Cover and Brad Lynch in attacking positions. A couple of half opportunities developed but Sam Ashton remained relatively unchallenged. As the board was raised to signal three minutes of stoppage time, Lancaster launched a direct move and delivered a sucker punch. The ball was spread out to the left and a fairly innocuous cross was then looped into the area, making it's way to the back post. Norris was on hand to knock the ball past Roberts and seal the points. Ultimately it was a harsh ending to the game for Colls, who took the game to Lancaster for sustained periods of the match. Lancaster were however unlucky not to find themselves ahead going into the break. Atherton Collieries: Theo Roberts, Clive Smith, Gareth Peet, Dave Sherlock, Danny Lafferty, Ian Rowlands, Oli Roberts (Niall Battersby), Vinny Bailey, Tom Bentham (Jordan Cover), Ben Hardcastle, Ben Conway (Brad Lynch). Substitutes (not used): Jack Egan, Jake Kenny Rama Spice Man of the Match: Gareth Peet Attendance: 330