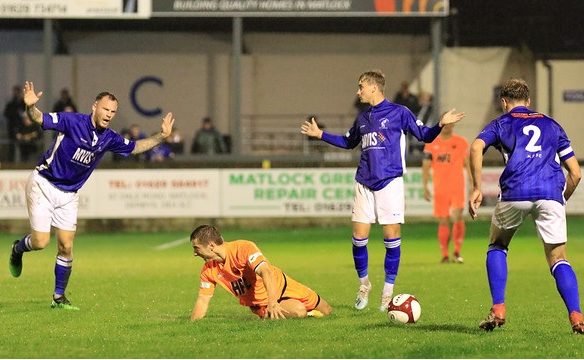 With a month's worth of rain falling in one day in some parts of the country, news of a pitch inspection at Matlock didn't fill us with confidence that a trip over to Derbyshire would be in the offing. However, at 4pm the call came that the game was on, equipment was hastily thrown in the car and we were off. A pleasant journey ensued via the Manchester rush hour traffic, past the airport and onto the A6. Taking in the Bakewell Tart Shop and some stunning countryside, we arrived just as the sun was setting, Riber Castle impressively overlooking the whole of the area from up on high. Parking next to the cricket ground, we were greeted by some very friendly volunteers as we went about our pre-match routine of locating the media facilities, food and bar. The teams emerged from a tunnel very much like our own to the Match of the Day theme, definitely something we need to try rather than Arcade Fire. The main stand being located directly behind the dug outs lead to a firey atmosphere. Matlock came into the game with their best league start for over 40 years but on the back of an FA Cup exit to the team who dispatched ourselves from the competition last season, Kidsgrove Athletic. Colls still stinging from that 3-1 defeat to Mickleover Sport had a point to prove, however that point had to be proven with just 3 substitutes; injuries and unavailability taking their toll. Despite a bright start, Colls were undone again with an early goal. A ball out of defence evaded the backline of orange shirts to fall kindly for Marcus Marshall. Gaz Peet resisted the temptation to pull him back as he drew the keeper and slotted home on just 4 minutes. However, this time Colls stood tall in the face of advercity. Battling down the left after great link up play by Tom Bentham, Kieran Feeney release Gaz Peet into the box and Adam Yates clipped his right leg for the referee to point to the spot. This was duly despatched by Tom Bentham to level the game, despite 'keeper Jon Stewart getting a good hand to the ball. Colls had 'keeper Oli Byrne to thank for entering the half-time break level. Firstly he denied Spencer Harris just after the 30 minute mark before pulling off a top draw save from Pitue Crouz again to his left on 40 minutes. Crouz hitting the post moments before as he proved himself to be a real thorn in the side of the Colls' defence. The second half was a very even affair, Bentham seeming intent on adding to his goal tally whilst the wet pitch allowed strike partner Jordan Cover to threaten with his pace. Hearts were in mouths on 68 minutes as Byrne allowed a backpass to run past his body and play out to Peet from on the goal line, the locals willing the ball into the net. The introduction of Jack Egan on 70 minutes changed the dynamic of the game. Colls were immediately on the front foot as a succession of shots were blocked in the Matlock box. Matlock's hopes of grabbing a winner disappeared on 85 minutes as Dan Bramall kicked out at Dave Sherlock and the red card was out again, fortunately not in Colls' direction! Although the midfielder did receive a yellow for his troubles. After the game, assistant-manager Andrew Heald was disappointed to only come away with a point after a performance that highlighted that the squad have nothing to fear in this division. Atherton Collieries>: Oli Byrne, Niall Battersby, Gaz Peet, Dave Sherlock, Danny Lafferty, Clive Smith, Ben Conway, Vinny Bailey, Tom Bentham, Jordan Cover (Egan 70'), Kieran Feeney (Keiran Nolan 79'). Substitutes (not used): Chris Cheetham Goal(s): Tom Bentham (24') Rama Spice Man of the Match: Oli Byrne Attendance: 276