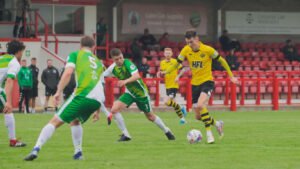 There was a warm welcome for manager Brad Cooke from the side he used to captain, as his Colls team faced off against Northwich Victoria in a warm up game played at Wincham Park. There were also several ex-Colls faces out on display, as a brace scored by Chad Whyte saw the North West Counties side take the win. The opening chance of the game fell to Colls, with Marcus Cusani winning the ball back high up the pitch and poking a lovely through-ball into Ben Conway but the midfielders shot was off-balance and failed to trouble the Northwich keeper. The home side took the lead after just six minutes, the ball hoofed up the pitch by the keeper and flicked on to Whyte, who managed to get the ball out of his feet before dispatching a lovely strike into the top corner. Colls had a couple of near misses to round off the first half, Rick Smith rising at the far post to meet a looping cross in from Cusani on the right, but his header was bundled out by the Vics defence for a corner. Kyle Sambor almost scored a screamer of his own on the half-an-hour mark, his vicious first-time volley acrobatically tipped over the bar by the Vics keeper after Cusani teed him up on the edge of the box. As the second half began, Jordan Darr looked lively from the bench, touching down a long ball from Clive Smith and cutting inside from the right but his shot was skewed wide of the goal. The hosts doubled their advantage on the hour mark through Whyte’s second goal, the striker cutting inside the Colls defence before cooly slotting the ball into the bottom left corner. He almost had a hat-trick moments later, driving through the defence before being denied by a superb Danny Taberner save. The Colls keeper was the busier of the two second half, comfortably saving a long-range effort before leaping to punch clear a dangerous cross delivered in from the right. The visitors tried to fight their way back into the game but to no avail, their best chance coming from a late free-kick delivered from deep. Rick Smith flicked the ball into the six yard area but Darr lost out to the keeper who was clattered to the floor in the process. Summing up the game, Brad Cooke said: “In the first half I think we started on the front foot and dominated the ball, that was evident to see, we just didn’t really create enough apart from that one chance for Kyle Sambor. From there the second half was a bit frantic, it was like a game of basketball at times, I don’t think anyone really took control. Northwich fully deserved the win and it was good to see some familiar faces today, I’m sure they’ll really kick on this season.” Atherton Collieries: Elliot Wynne, Trialist, Gaz Peet, Clive Smith, Danny Lafferty, Rick Smith, Danny Lambert, Vinny Bailey, Kyle Sambor, Marcus Cusani, Ben Conway. Substitutes: Danny Taberner, Jordan Darr, Trialist, Lewis Doyle, James Sigworth, Elliot Rokka Match Report: Danny Brown Photograph: David Featherstone