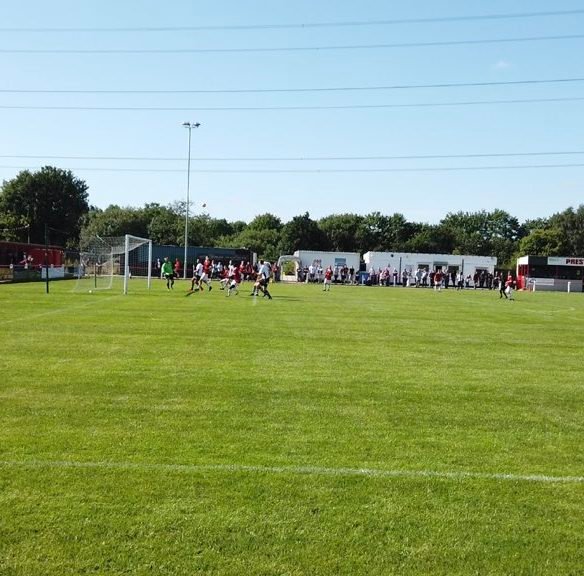 Colls headed to what was originally scheduled to be the start of their pre-season campaign at Prestwich Heys, a high profile game with League Two Salford City slotted in last week meant we were slightly more back in the groove already. At a gloriously sunny Adie Moran Stadium, the game actually felt like pre-season was underway, with a very unfamiliar Colls line-up featuring that mainstay of such games – Trialist! Colls had the better of the opening period, Jordan Cover breaking free down the channel on 13 minutes, shooting narrowly wide across the keeper then even closer from the Colls left-back Trialist who rattled the woodwork on the half-volley on 24. From then, Prestwich came more into the game and Colls Trialist keeper denied Lee Grimshaw low down to his left then saving just before the 30 minute mark. Heys came close firstly as James Sinnot’s cross-cum-shot drifted narrowly over then Jordan Pendlebury missed a glorious chance. Side-footing narrowly wide from 8 yards out. Colls again started the second half brightly, despite making a number of changes at the beark. Firstly Trialist playing centre-forward cut in from the left and curled a shot which smashed against the crossbar and out to safety then Tom Bentham had his shot well blocked when in a great position to open the scoring. The addition of an unknown trialist and a very familiar one meant Colls continued to ask questions of Prestwich in the wide positions. The deadlock was finally broken on 71 minutes when Ian Rowlands, who had played at Prestwich last season following a spell out with injury was able to direct a Ben Hardcastle cross back across goal, the ball eluding the defence and goalkeeper to nestle in the net, after intelligently peeling away at the back stick. The lead was soon doubled following good work by Trialist on the left to cross in the direction of Tom Bentham, the ball falling kindly for Trialist to coolly slot home. Prestwich however weren’t done and Colls defence had to be alert as Rio Wilson-Heyes and Jordan Pendlebury going close to grabbing a goal to narrow the lead. The game was however wrapped up when that man Trialist popped up again with a superb finish, lobbing the keeper, to wrap the game up 3-0. MOM - Trialist