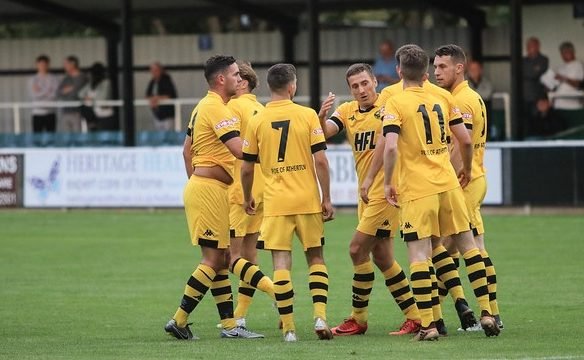 Colls returned to Shawe View, Trafford, in their penultimate friendly of pre-season on bright summer evening, in stark contrast to our visit in the league on Boxing Day when fog from the ship canal threatened to consume the ground. Looking far brighter than their last outing, last season’s stand out players Gaz Peet and Ben Hardcastle impressing from the off. Hardcastle had the first sight of goal on 10 minutes when his free kick was spilt by the Trafford keeper but cleared before Freddie Potter was able to react. Trafford had a couple of sights of goal themselves as Jordan Wynne broke through only to shoot straight at Chris Cheetham. Captain Sam Egerton had a header from a corner also well tipped over by Cheetham. In between these was the bizarre occurrence of drop ball when the ball deflected off the referee, changes to Law 9 of the game confusing all around, including the players. Vinny Bailey was pulling the strings in the Colls attack supported by Jack Egan and Brad Lynch on the wings. Bailey first slide a pass through to Hardcastle who fired narrowly wide then similarly played in Gaz Peet following a throw in. Last season’s Player of the Season cutting in from the left and firing an unstoppable shot into the roof of the net to open the scoring on 37 minutes. Second half saw the industrious Potter threaten the goal with a shot from outside the box before playing the ball out wide to Hardcastle on the right, his step-over bamboozling the Trafford defence as he cut in and hit a rocket shot also into the roof of the net on 60 minutes to double the lead. Trafford’s came close to pulling a goal back on 82 minutes as substitute Adam Rooney hit a shot from distance which ricocheted off the top of Cheetham’s bar and into the trees. A professional performance from Colls for whom Jake Kenny completed 90 minutes in the right-back berth with Clive Smith looking accomplished at centre-back, partnering captain Danny Lafferty. Atherton Collieries: Chris Cheetham, Jake Kenny, Gareth Peet, Clive Smith, Danny Lafferty, Nolan, Egan, Bailey, Potter, Ben Hardcastle, Brad Lynch. Subs (all used): Sherlock, Roberts, Cover