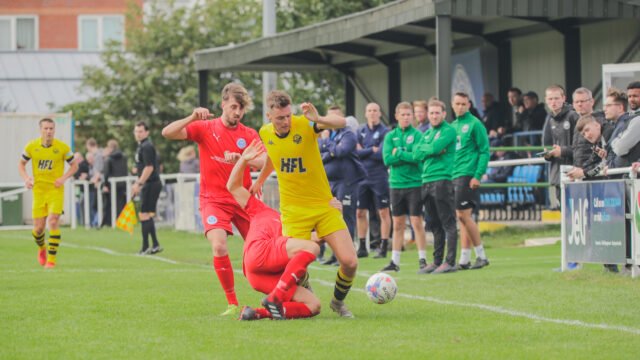 After a wait of 5 months and 11 days, the Colls faithful were finally welcomed back to support the black and whites for our trip to Warrington Rylands, the latest pre-season test for Brad Cooke’s men. The returning Colls loyal were welcomed back with a bang, as Jordan Darr sparked the game to life with a goal in the opening minutes. A cross into the box was knocked down at the far post by Rick Smith, for Darr to scramble over the line for an early Colls lead. The chances flowed throughout the first half, with the most notable chance falling for Rylands, who looked to have converted for a certain goal until Colls' Clive Smith cleared from the goal-line. Bradley Cooke's Atherton Collieries had a penalty shout later in the half, with Ben Conway tripped inside the corner of the box, but shouts were waved away by the referee. The intense opening to the first half was repeated in the second, with the Colls sealing victory moments after the restart. Kyle Sambor doubled the Collieries advantage during the second half’s opening salvo, slotting home after Marcus Cusani entered the final third with vigor, poking the ball through the Rylands defence for Sambor to convert. Celebrations had not yet died down when the Colls extended the lead. A cross into the Rylands box was cleared by their defence, only for Ben Conway to produce the best goal of our campaign so far with a powerful volley from outside the box, a goal for the returning supporters to truly savour. Warrington Rylands grew into the game after the third goal, enjoying some sustained spells of pressure towards the end of the game. However, Brad Cooke's men restricted opportunities for our hosts and saw the game out successfully, securing a 3-0 victory for the Collieries against a promising Rylands side. Preparations for the 2020-21 season continue on Tuesday night, when we welcome Ashton Athletic to the Skuna Stadium. Tickets for the match will be priced at £5 and £3 concessions. The game will be “pay on the gate”, though attendance will be capped at 300 on a first-come first-served basis, so supporters are encouraged to arrive early as the gates will be closed should the capacity be reached. Atherton Collieries: Elliot Wynne, Clive Smith, Gareth Peet, Niall Battersby, Danny Lafferty, Rick Smith, Ben Conway, Lewis Doyle, Jordan Darr, Kyle Sambor, Elliot Rokka. Substitutes: Danny Taberner, Marcus Cusani, James Sigsworth, Trialist, Dylan Glass