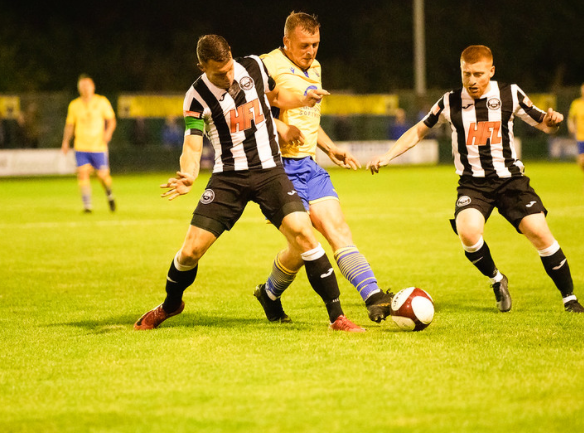 Three days on from the victory against Grantham, Colls were unable to make it two wins on the bounce as they suffered a 2-0 defeat under the floodlights at Warrington Town. Two second half goals secured the points for the home side at Cantilever Park, with Colls’ Elliott Rokka seeing a penalty saved for the chance to equalise. The home side fielded a number of large attacking players and were a danger throughout, Josh Amis’ header glancing off the bar inside the first ten minutes a sign of things to come. Arguably the best chance of the first half fell to Colls’ Jordan Darr, the striker’s effort was cleared off the line after some wonderful footwork from Ben Conway out on the right. It was less than five minutes after the restart that Town took the lead however, Matt Regan heading against the bar before the ball was bundled home by Mark Roberts. Colls were given a golden chance to equalise when Jordan Darr was bundled over in the box and a penalty awarded, however Eliott Rokka’s spot kick was easily saved by the keeper. Having missed the chance to draw level, Colls were soon punished with Town’s well-worked corner kick finding Josh Amis at the back post, who rifled his effort in off Danny Taberner. From there it was always going to be an uphill battle for the black and whites, a Danny Lambert effort cleared off the line in the dying stages summed up Colls’ luck on the day. Colls will need to pick themselves up for their next game, which takes place on Saturday as we face Guiseley behind closed doors in the FA Cup Second Qualifying Round. Atherton Collieries: Danny Taberner, Clive Smith, Gaz Peet, Danny Lambert, Danny Lafferty, Rick Smith, Ben Conway (Dylan Glass), Vinny Bailey, Jordan Darr (Jack Banister), Marcus Cusani, Elliot Rokka (Kyle Sambor). Unused subs: Ellis Roberts, Niall Battersby. Man of the Match: Marcus Cusani (Sponsored by District Garage Bolton) Attendance: 420 Match Report: Danny Brown Photo: David Featherstone