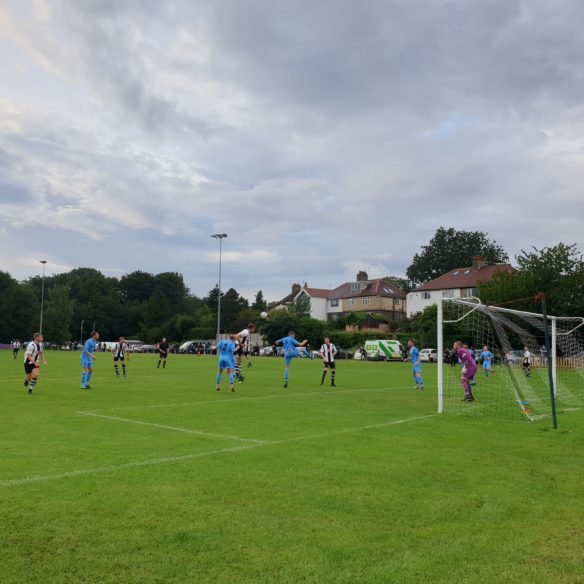 Following a famous 2-0 victory over Al-Ittihad last Wednesday night Colls headed to Brookburn Road for a friendly fixture against West Didsbury & Chorlton. Former club captain Brad Cooke has taken up the managerial reigns at West over the summer and has assembled a squad and backroom that proved to be extremely familiar to Colls fans. Kris Holt, Callum Jones, Jamie Forbes, Neil Chappell, Dylan Maloney, Ash Woods and Matty Boland have been signed up while Warren Jones and Rob Sadler join Cooke in the dugout. West shaded the first half and their first clear cut chance of the game fell to one of the aforementioned former Colls players in Forbes. A free kick was swung in and the centre half connected but could only blaze his effort into the tree behind the net. Colls continued to try and knock the ball around well and forced a corner up the other end. It was half cleared and Rowlands did well to meet a Roberts cross but his header looped over. On 20 minutes a well worked set piece routine resulted in the ball going just wide of the post after Gareth Peet had pulled it back on the byline. Kris Holt, who spent two spells at Colls, tried his luck from distance when he saw Cheetham off his line. The goalkeeper back peddled and did well to tip the ball over the crossbar. He did, however, get his name on the scoresheet five minutes before the interval when he latched on to a Lee Gavin through ball. Holt saw his first effort saved by Cheetham but was able to nod into an empty net at the second time of asking. Micheal Clegg changed his lineup for the second half and before they had time to settle they found themselves two goals down. Trialist crossed the ball low from the right hand side and it found the bottom corner despite Matty Boland trying to apply the finishing touch. West were happy to sit back on their lead and Colls spent the remainder of the game knocking the ball around but were unable to find much joy in the final third of the pitch. As the rain came down at Brookburn Road the match petered out to its conclusion. Atherton Collieries (First Half XI): Cheetham, Kenny, G. Peet, Roberts, Grimshaw, Rowlands, Perry, Sherlock, Bentham, Trialist, Mustapha Atherton Collieries (Second Half XI): Cheetham, Battersby, Gareth Peet, Smith, Lafferty, Nolan, Bailey, Rowlands, Hardcastle, Trialist, Trialist West XI - A. Jones, Cook, Cooper, Tinker, Forbes, Eckersley, Trialist, Gavin, Cottee, Holt, Boland Referee: J. Buckle Match report: Joseph Gibbons