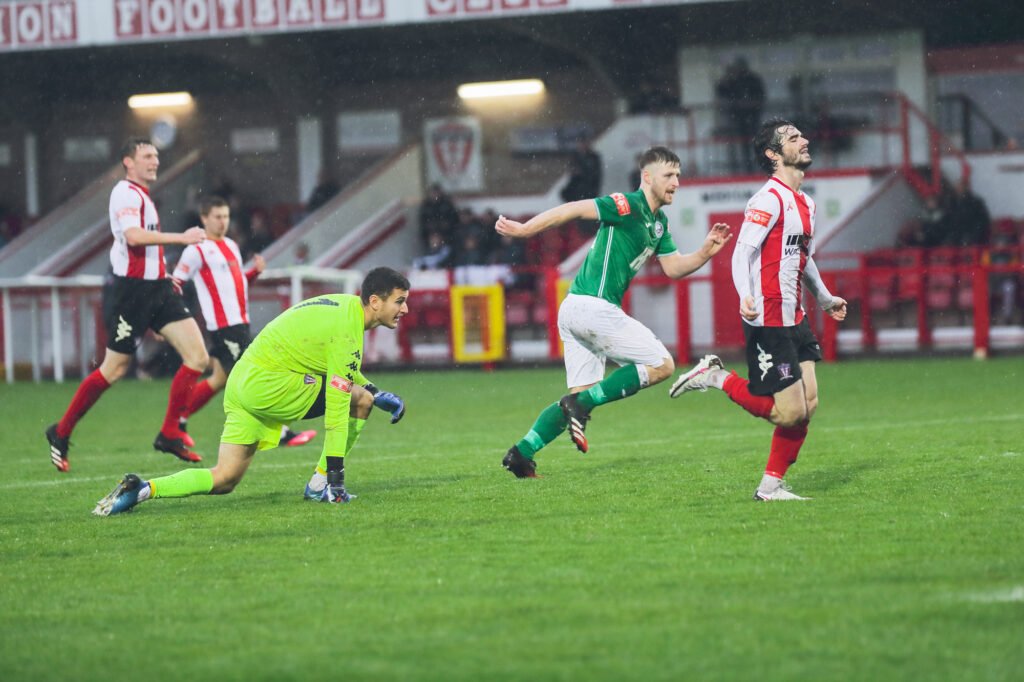 Following a strong opening to the season, Colls were disappointed not to carry on their winning form as they tasted a narrow away defeat against Witton.
Described as a ‘game of two halves’ by manager Brad Cooke, a poor first half display saw Colls 2-0 down at the break, with Dylan Glass pulling one back in the second half. Despite a spirited performance after half time, the visitors were unable to secure a point with captain Danny Lafferty seeing a last-gasp equaliser frustratingly chalked out for offside.
It was a slow start for Colls, who found themselves behind inside two minutes. A cross in from the right found Albion’s Will Jones, who headed home to give the hosts the advantage. From there it went from bad to worse, as keeper Eliott Wynne was judged to have brought down Albion’s Scott Bakkor in the box as the forward raced through on goal.
It looked like the Colls man had taken the ball fairly but the referee pointed straight to the spot and showed Wynne, in for the injured Danny Taberner, a yellow card for his troubles.  James Foley stepped confidently and dispatched the spot kick into the bottom corner, to double the hosts’ lead on fifteen minutes.
Ben Conway limped off shortly after and was replaced by Elliot Rokka. Another defensive scare on the half-hour mark saw Rick Smith next to go into the book, his poor pass forcing him to bring down his man.
Brad Cooke wasted no time making changes at half-time, with Dylan Glass and Jack Lenehan on to replace Jordan Darr and Niall Battersby, as Colls shifted to a 4-3-3 shape. The tactical changes made an immediate impact with the first chance of the half falling to Colls, as Marcus Cusani stung the hands of Chris Renshaw from a slick counter attack.
Rick Smith headed an effort off the line shortly before Dylan Glass was able to halve the deficit at the other end, racing clear of the Albion defence and slotting past the keeper with twenty minutes to go. Glass’ strike gave Colls new-found confidence, with the away side dominating much of the possession in the latter stages as they chased the equalising goal.
Some good footwork from Elliott Rokka saw him able to cut inside in the area but his shot was deflected away, with Jack Lenehan’s follow up also thwarted by the defender. A glorious chance fell to Rick Smith with five minutes to go, the defender finding himself free at the back post but unable to turn the ball home, in part due to the wet conditions in the box.
It was deep into stoppage time that Colls thought they had snatched a late equaliser, a reverse pass finding Danny Lafferty in the area who lashed it out of his feet into the top corner. Celebrations were cut short however, as the linesman's was up with the Colls skipper judged to have been narrowly offside, denying the visitors a deserved point at the death.
Reflecting on the game Brad Cooke said: “It was a game of two halves. First half it was men against boys but second half I thought we came out and really gave it a go. I changed the shape in the first half so I’m happy to take the blame for the first half performance, I thought we were much better after the changes.
We were knocking on the door in the second half. They’re a very good side and we’ve taken them right down to the wire and had a goal disallowed. It shows we’re not a million miles off. I’m frustrated, not so much with the result but certainly with the first half performance. We’ll go again against Stafford. ”
Atherton Collieries: Elliot Wynne, Clive Smith, Gareth Peet, Danny Lambert, Danny Lafferty (C), Rick Smith, Niall Battersby (Jack Lenehan 45'), Vinny Bailey, Jordan Darr (Dylan Glass 45'), Ben Conway (Elliot Rokka 25'), Marcus Cusani
Goal(s): Dylan Glass (70')
Rama Spice Man of the Match: Eliott Rokka (Sponsored by Atherton Crumble)
Attendance: 443 Report: Danny Brown Photograph: David Featherstone