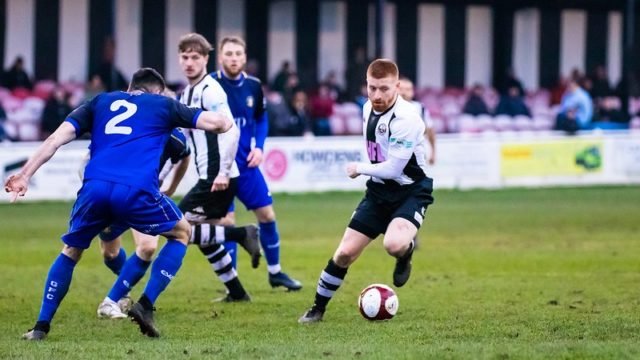 Gainsborough Trinity arrived for their first ever visit to Atherton, looking to avenge their defeat at Northolme in October. It was to be their new signing Nicky Walker who left with the plaudits, bagging a hat-trick and leaving with the match ball. Walker having played at the Skuna for Boston United in the FA Trophy giant-killing earlier in the season.

Colls had the first chance of the game on 11 minutes when Tom Bentham dispossessed Michael Williams in the box and shot through a crowd of defenders, only to see George Wills save smartly with his feet.

Trinity’s first attack of note was to completely undo Colls, target man Greg Smith flung an arm than floored Ben Conway as the referee watched on nonchalantly. Alex Wiles collecting the ball, dancing through the defence and cutting back for Walker to put into the unguarded net.

There was to be an almost action replay on 39 minutes, Trinity with another throw in from the right, this time Smith outmuscling Danny Lambert for the ball to fall for Wiles again to tee up Walker for his second, this time shooting through the legs of the unlucky Clive Smith. Before the break, Paddy Wharton was then forced to strong arm a piledriver to safety as Curtis Woodhouse’s side looked to put the game to bed.

The black n white stripes were almost back in it within moments of the restart. Skipper and birthday boy Danny Lafferty rose highest at a set-piece but his attempt cannoned  off the outside of the post.

The second half was to drag, Gainsborough slowing the game down and Colls not playing their normal fluid football, the stop/start nature of the game not conducive to the entertainment value. It took until 85 minutes before Colls had any joy. Gaz Peet again running at the defence, as they backed off, he drilled a shot across goal that struck the far post and pinged into the back of the net to draw the game back to 2-1. An unstoppable effort.

As Colls pushed for one last chance in the prolonged injury time, Walker sprung the offside trap in the centre-circle, fending off the attentions of the backtracking Vinny Bailey to fire across Wharton and wrap up the game.

A below par Colls display punished by a no nonsense Trinity outfit who thoroughly enjoyed their first trip to downtown Atherton.