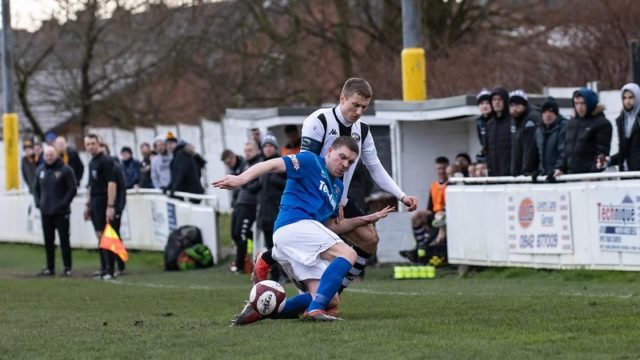 The Highwaymen journeyed south and plundered the three golden points before negotiating Storm Ciara on the trip home.

Morpeth led within ten minutes when an inviting centre found midfielder Liam Noble in acres of space and he did the business with the minimum of fuss. The advantage was soon doubled. Calamitous and complacent Colls defending enabled Carl Finnegan to nod home from a yard. Defenders didn’t react when a shot cannoned off the post, then the bar and somehow stayed in play. Dylan Glass had Colls best, and possibly only, chance of the first half, Dan Lowson saving his snapshot smartly. In injury time John Welsh was given a red card for a challenge to make his team’s comeback hopes even more remote.

Colls started with a lot more passion following a shallacking from the management team but were hit with another blow when Joe Walton cushioned a karate kick type finish past Paddy Wharton. Definitely the goal of the game. Record goalscorer Jordan Cover briefly gave a glimmer of hope with a tidy chip after latching on to a smart Bailey free kick but Walton immediately restored the three goal cushion with another pearler. Substitute Jack Foalle bagged in injury time to ensure the nap hand and finally put their hosts our of their misery.

A first half display from hell by the black n white stripes. The game was over as a contest within the first fifteen minutes as the Northumberland outfit dominated every facet of the game totally. A much improved Colls second half performance but an excellent Morpeth team were again ruthless in front of goal. Brad Cooke pulled no punches in his after match interview. He knows he has a job on his hands.

Final mention goes to skipper for the day Gareth Peet who made his 300th competitive appearance for the club. He made his bow in a low key 1-0 NWCFL Division 1 defeat at AFC Blackpool on Tuesday 24 August 2010. Since his inauspicious debut Sir Gaz has won the NWCFL Division 1 Trophy, NWCFL Division 1 Championship, Bolton Hospital Cup, NWCFL League Challenge Cup, NWCFL Premier Division Championship, NPL Integro League Cup and NPL Division 1 West Championship. No Colls player can boast CV like that in the last fifty years at least. Last season he picked up an unprecedented four out of the five end of season players awards. A true Collsmon icon.