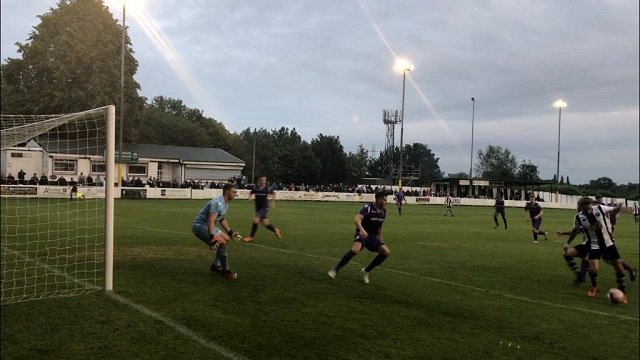 On at balmy night at the Skuna, Colls faced another very tough pre-season test as newly promoted National League side Chorley brought a strong side featuring trialists from league clubs.

The Magpies were first to threaten the goal on 20 minutes when Clive Smith cleared off the line following great build up play. Colls had to wait until the 30th minute before launching an attack of note, Ben Hardcastle shooting wide from the edge of the box.

Tom Bentham created Colls best chance of the half on 39 minutes when he won two 50/50 tackles in the midfield area, rode a third challenge before playing the ball to Danny Lambert who crossed for Bentham himself to nod narrowly wide inside the box.

The game then turned in Chorley’s favour, Elliot Newby was adjudged to have been fouled in the box, stepping up himself for the spot kick, only for Chris Cheetam to pull off a great save. However, minutes later, just before the break, Chorley came agains and Josh O’Keefe was able to finish after a header back across the box to open the scoring.

The second half saw a couple of changes for both teams and Chorley were soon on the scoresheet again, Elliot Newby making amends for that earlier missed penalty.

From then on, Colls had some great chances to get on the scoreboard, Tom Bentham unable to direct a cross from Trialist on target and Jordan Cover being denied by a point blank reflex save onto the bar after heading a Gaz Peet cross goalwards from 4 yards out.

On 75 minutes, Bentham again was unlucky not to get himself a goal, hitting a rasping shot from a free kick lay-off. Cover and Hardcastle unable to benefit from the rebound.

The pace of Colls attack continued to cause Chorley problems, Cover and Trialist on the left going past defenders with ease, to the delight of the crowd, but unable to put the icing on the cake.

With Chorley looking dangerous each time they attacked, the game provided another decent run out for the squad.

Man of the Match – Tom Bentham.