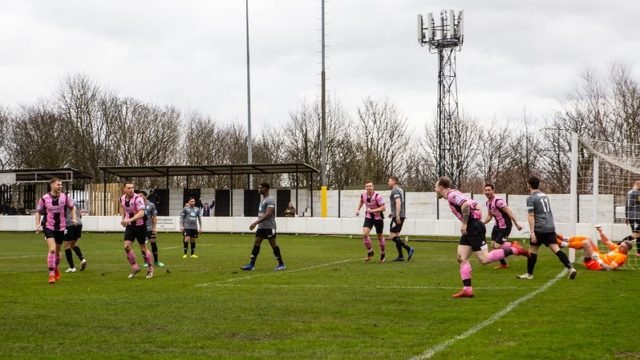 Buoyed by a midweek demolition of Stalybridge Celtic in the Integro Cup, Colls were back on home turf to face the team immediately above them in the table, Grantham Town. Colls albeit having a mere five games in hand, the game was still considered a must win if the league table was to be ascended. One noteworthy change to the starting line-up was the return of goalkeeper Danny Taberner, last seen at Alder Street in our North West County days, adding to his previous 94 appearances.

Wearing their one off Pink shirts, in collaboration with local band Lottery Winners and Bands FC, the home side took the lead with their first meaningful attack with just 90 seconds on the clock. Louis Myers was hauled down outside the box after Ben Conway had nutmegged former Bury man Danny Racchi. Conway delivered the ball across the six yard box and as captain Danny Lafferty had his shirt pulled, Myers ghosted in to slot home from an acute angle.

Grantham came closest to adding to the goal tally in the first half, another former Bury man, this time Joe Skarz, striking the post from a corner late on. However Colls were able to see out the danger and head down the tunnel with their lead intact.

Colls doubled their lead early in the second half as Cain Noble headed a Grantham goal kick back into their own half for Tom Bentham to direct into the path of Ben Conway. The winger, presented with a clear route through to goal, drew ‘keeper Jon Worsnop and rolled the ball into the net.

With that, the visitors threw caution to the wind and pressed men further forward. This nearly paid off on 74 minutes when the ball was headed in to the Colls net but the referee blew for a foul, the foul count for the game being particularly high with soft free kicks being the order of the day.

In the dying minutes, the Gingerbreads spurned chances to clear the ball as Vinny Bailey jinked into the box and produced a brilliant reflex save from Worsnop to keep it at 2-0. The three points moves Colls to within touching distance of the clubs above them in the table.

There is no league action this midweek as we head to the Country Ground, Leyland, on Wedndesday as we face Lancaster City in a Lancashire Challenge Trophy semi-final before another must win game on Saturday; away to bottom side Stafford Rangers.