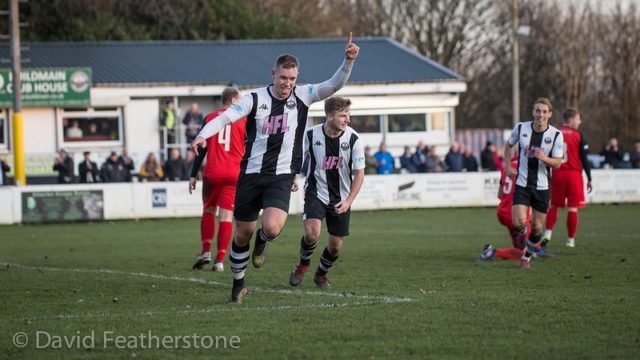 Following a tumultuous forty eight hours since the shock defection of manager Michael Clegg and his staff to Ashton United the boys in black n white responded unbelievably to record their best win of the season.

The Preston based opposition arrived on the back of a couple of good victories and hoped to exploit the upheaval at the Skuna Stadium, Colls were unchanged from the side which upset the Boston United applecart last time out. The game started brightly but both defences were on their mettle. Gareth Peet was again a catalyst for all things good about the hosts and he was unlucky not to win a penalty when he was bundled over.

However Colls did get a nailed on spot kick decision on 26 minutes, Ben Hardcastle was dragged down and Tom Bentham sent the keeper the wrong way. Ben Conway unluckily hit the bar from out wide before Bentham bagged his brace ,and twelfth of the campaign, from close range after a Conway assist.

The resurgent Conway then got the goal his first half display deserved after being teed up by Hardcastle. James Dean had Brig’s beat effort but his hurried snapshot hit the post. A virtuoso forty-five minutes the from the home team.

Ten minutes after the interval the lead was increased when Hardcastle got his just reward following good Peet approach play. This strike for intents and purposes wrapped things up and the black n white stripes turned it down a notch, happy that barring a miracle the three vital points were in the can. Brig came into the proceedings more and in form sub striker Gary Pett pulled one back when his sharp shot nestled into the bottom corner of the net. He almost added to his tally in the dying embers of the game but Greg Hartley denied him with an excellent reflex save.

The players left the field to rapturous and deserved applause, the Colls fanbase rallied to the pre-match cry of skipper Danny Lafferty to be the twelfth man brilliantly. On an emotional afternoon in downtown Atherton, special mention has to go the departing coaches who prepared the team with enthusiastic professionalism and this enabled the lads to play with unbridled freedom.

The end of an era and what a ride it has been over the last five and half years. Michael Clegg and Co have left an unbelievable legacy at the football club but the show must go on. His quote in The Non League Paper “Hopefully whoever comes in at Colls can carry on where we’ve left off -that would be the ideal situation for me” sums it up perfectly.