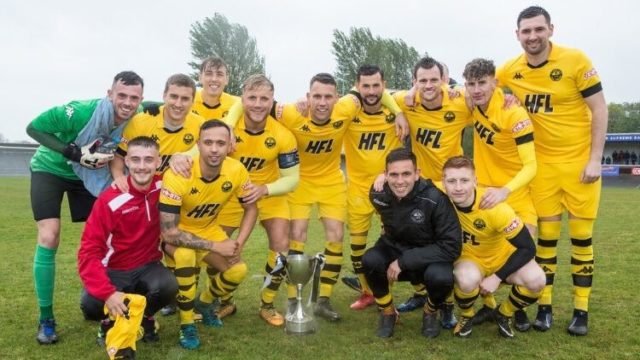 The glorious sunshine of Colls’ championship party on Monday had completely disappeared, to be replaced by howling wind and incessant rain that had everyone sheltering in the clubhouse until the last possible moment.

With the trophy already secured, and with its handle reattached, the final game of the season had very much a party atmosphere. Colls fans made the journey in their fancy dress costumes or sporting their new Atherton Crumble t-shirts, the team having crates of a well know American beer packed rather than the usual sports drinks to rehydrate.

Colls were led out by captain for the day Josh Peet, a reward for sticking with the club. In his second spell at the club, Josh put in solid performances when required, particularly over the Christmas period when the squad was stretched to its limit. The Newcastle Town squad and staff provided a touch of class by forming a guard of honour as the Colls took to the pitch.

It was the ever present Evo-Stik Division One West Player of the Season Ben Hardcastle who had the best chances of first 30 minutes, Colls first attack of the game led to a corner, Hardcastle’s resulting shot flying narrowly wide. Twenty five minutes passed without real incident before a delightful Josh Peet ball dissected the Newcastle defence to create another opportunity for Hardcastle, again his shot failing to trouble the opposition keeper.

Colls best chance of the half came on the half hour mark, Jordan Cover chipping the ball over the defence for Gaz Peet to run on to and bare down on the Newcastle goal. His shot lashed on target but was parried out by a reflex save.

Newcastle had their best chance of the half 5 minutes before the break, James Steele firing in a low cross that somehow evaded everyone in a crowded penalty box without testing Chris Cheetam in the Colls goal.

The game itself was wrapped up in a 5 minute spell on the hour mark, Connor Hughes creating a chance for substitute Tom Bentham to slot into an empty net before Bentham was first to react to a moment of indecision in the Newcastle defence to double his tally for the game and Colls’ lead.

The highlight of the game saw Colls’ regular goalkeeper Greg Hartley having a 10 minute spell in the centre-forward position. Hartley, an FA Youth Cup winner with Manchester City, actually once played this position for the Sky Blues reserves against Newcastle United at St James’ Park. However, the opportunity to add himself to the list of Colls goalscorers this season didn’t materialise as those two Tom Bentham goals took the points back the Atherton, meaning the title was won by seven clear points from second placed Radcliffe.

Man of the match: Gaz Peet