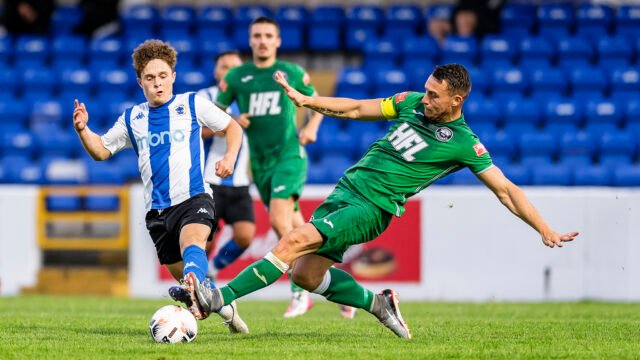 A well-taken strike from Kurt Willougby in the first half settled the game, despite a rallying second half performance from Brad Cooke’s men.

Colls started the game on the front foot and earned a couple of early half-chances, Dec Daniels and Luca Defreitas-Hansen both failing to trouble the keeper with headed efforts.

As the half progressed, the home sides’ quality began to show as they went close first through Darren Stephenson and then former Colls-man Iwan Murray.

The goal would come in the 21st minute, Joe Lynch’s pass splitting the Colls defence and Kurt Willoughby producing a sublime first touch and finish to put his side ahead.

Despite being under pressure for much of the first half, Colls made tactical tweaks at the break and looked a far more dangerous attacking side in the second half.

The introduction of Ethan Kershaw and Marcus Cusani gave a much-needed injection of pace into the Colls midfield, with Oli Roberts leaving the pitch only to return after a knock to Jack Lenehan.

Aaron Smith prompted a save from the keeper with a free-kick taken from distance, before Colls’ trialist keeper produced an impressive save of his own to deny Willoughby a second.

Both of Collieries’ centre halves went close, skipper Danny Lafferty glancing wide from a corner before Luca Defreitas-Hansen was inches away from connecting with a cross from trialist.

Five minutes from time Colls had a golden chance to draw level – Marcus Cusani’s sublime pass releasing trialist, only for his effort to be thwarted by Tyrer in the Chester goal.