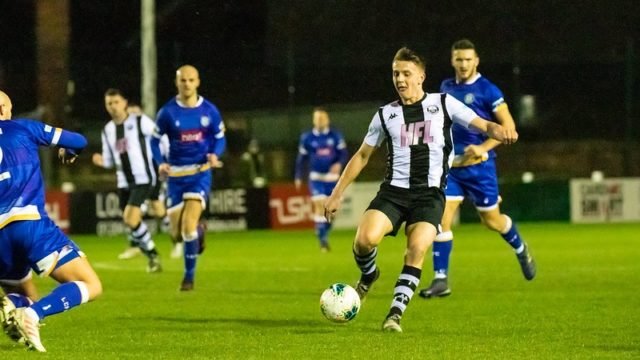 Colls were buoyed by the return of experienced John Welsh following a three game ban Welsh replaced a cup tied Matt Makinson and Vinny Bailey returned to the starting eleven place of an unavailable Ben Conway. City were equally happy with the return of their talismanic skipper David Norris who had also served a suspension.

The incessant first half downpour was beyond ridiculous, Colls were certainly disadvantaged but it was no picnic for either side. The Dolly Blues had the majority of possession but Danny Taberner was relatively quiet barring a fine save at his near post just after the half hour mark. Louis Myers had earlier seen a netbustler chalked off for offside.

The swirling rain was still there after the interval albeit becalmed and Brad Cooke’s team took the game to their promotion chasing opponents. Gareth Peet whistled one narrowly wide and Tom Bentham’s close range effort struck a relieved and well positioned Sam Ashton.

Ashton then somehow spectacularly palmed over a powerful Myers header; the Danny O’Brien centre was sublime. City had been reduced to long distance pot shots but on 74 minutes came the decisive moment of the game. A Lancaster attacker seemed to get the final touch on a corner but the referee, by common consent, mistakenly pointed for another corner.

The resultant set-piece saw the ball hit an unsighted Clive Smith positioned near the far post and ricochet past Taberner before he could probably blink. Sheer joy for the blues and more than a touch of incredulity for the black n whites.

Colls tried valiantly to get back on terms to force spot-kicks but it was not to be as the pre match favourites hung on relatively easily for the narrowest of victories. It was not to be for the Colls lads but you certainly cannot fault the effort and endeavour. Lancaster got the rub of the green twice inside a minute and it settled a semi final played in a good spirit throughout. That is football.

On Saturday it’s a first ever trip to Stafford Rangers as the team embark on a mammoth sixteen league game adventure, plus at least one Integro Cup outing, in a manic six week period. All hands to the pump, real life on hold. Let’s get behind the boys.

Man of the Match: Louis Myers