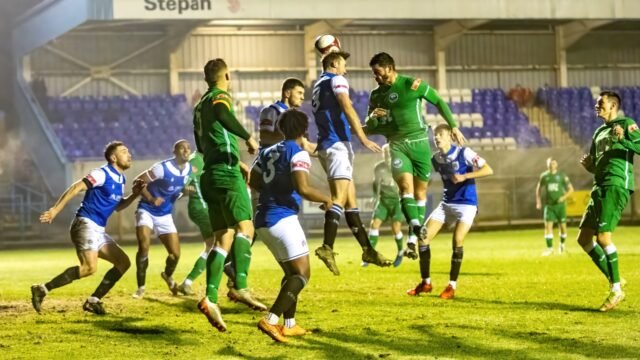 Atherton Collieries travelled to the home of Stalybridge Celtic but were made to rue missed opportunities as Brad Cooke’s men fell to a 1-0 defeat.

Colls welcomed a familiar face back into the starting line-up as club legend Danny Taberner returned between the sticks following a short stint at City of Liverpool FC.

Despite a relatively even start to proceedings, it was Brad Cooke’s Colls that were creating the better chances to opening the scoring.

In the opening couple of minutes, Gillam couldn’t quite latch onto a excellent low cross from Smith on the right, then around 10 minutes later, Sephton’s front-post header rattled the crossbar.

Gillam had another great opportunity as he went clean through on goal but failed to convert. Hughes in the Celts goal did well to smother the opportunity.

As the opening half drew to a close, Colls will have seen themselves unfortunate not to go into the interval with the advantage.

The hosts came out for the second half flying out of the traps, putting Colls under real pressure in the opening exchanges, and it didn’t take long for them to take advantage of their dominance.

Raul Correia, on his debut for the Celts, produced an excellent turn to get away from the defender and lashed his shot into the bottom corner.

Stalybridge continued to dominate large spells of the second half, not allowing Colls to settle into the same rhythm they had in the first half.

But around the 70th minute, Colls got the break they desperately needed; a penalty. Colls’ resident penalty taker, Gillam stepped up seeking his 8th goal of the season, but his effort was tame and saved comfortably by Hughes. Lambert did latch onto the rebound but his effort sailed over.

As the referee brought proceedings to a close, Colls will have been frustrated not to have been able to convert the chances they had produced. Credit to the home side, who came flying out of the blocks in the second half and got the goal they deserved.

Colls go again with a trip to Whitby Town on Saturday 15th January, kicking off at 3:00pm. Keep an eye on our social media channels for further information about the game.