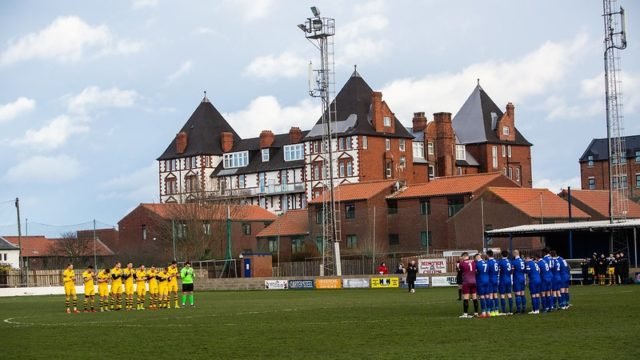 Colls returned from their first ever trip to the North Yorkshire seaside town of Whitby pointless in a game ruled for the most part by ridiculously high winds.

In a changed line up Jordan Boon made his bow and Dylan Glass was handed a first start. The hosts played with the wind advantage in the first half and used it to their advantage early doors when Adam Gell arrowed a neat shot into the bottom corner from the edge of the box. On twenty minutes a flashpoint incident. Krissy Holt was unceremoniously bundled to the ground by an out of control Jassem Sukar challenge. As the midfielder received lengthy treatment the production of a get out of jail free yellow card elicited a cocktail of anger, incredulity and derision from the Lancastrian minority.

The Colls were forced to defend doggedly and Wharton had to be at his best to acrobatically tip a sortie from distance over the bar. In the best visiting moment three attempts were fired off within seconds as Glass eventually shot wide. In the next play the Seasiders doubled the lead when Dale Hobson sent Wharton the wrong way from the penalty spot. Questioning whether there was a potential offside shout or if the foul was in the box is immaterial.

The elements favoured Colls initially in the second half but disaster struck immediately. Shilly-shallying in their own half enabled the Town to fashion an opening which Callum Patton willingly took for a ‘bonus’ goal. An unlikely comeback never looked likely as the wind dropped like a stone and the home players seemed to be able to fathom every idiosyncrasy of a difficult surface. Tom Bentham has a couple of half chances before a close range Glass finish on eighy-three minutes made things slightly more interesting. Two or three ball bobbling edge of the box punts rained in but unfortunately sailed out of the ground.

No complaints whatsoever about the result. The Whitby players had the local knowledge and played the farcical conditions the better. There was no lack of effort from the Colls boys who have to dust themselves down for the Ashton United home clash on Tuesday.

MOM – Kris Holt – Buzzed about in the middle of the park.