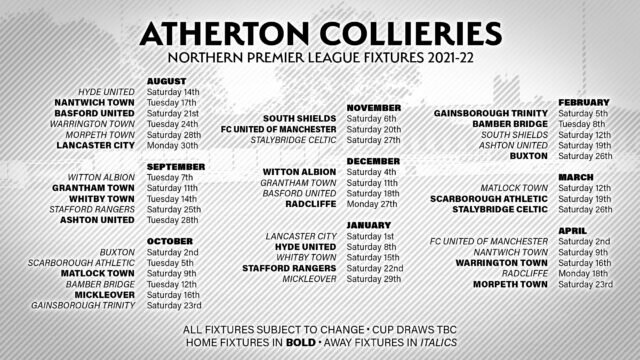 Atherton Collieries are excited to confirm our fixture schedule for the 2021-22 Northern Premier League Season.

Our campaign opens on Saturday 14th August with a trip to Hyde United, followed by our first two home ties against Nantwich on Tuesday 17th followed by Basford on Saturday 21st.

This season’s Bank Holiday fixtures begin with August Bank Holiday weekend, when we will travel to Morpeth on Saturday 28th August before welcoming Lancaster City on Bank Holiday Monday (30th). The annual Boxing Day fixture will be against Radcliffe on December 27th, followed by a New Years Day away trip to Lancaster.

Our Easter bank holiday fixtures will be Warrington Town at home on Saturday 16th April, followed by a trip to Radcliffe on Easter Monday (18th April). Our final scheduled match of the season comes on April 23rd, a home tie against Morpeth Town.

For fans of an away day, the fixture gods have been relatively kind, with our only long distance midweek trip scheduled to be against Scarborough on Tuesday 5th October. Other notable away days include trips to Gainsborough on Saturday 23rd October, Grantham on Saturday 11th December, Whitby on Saturday 15th January and South Shields on Saturday 12th February.