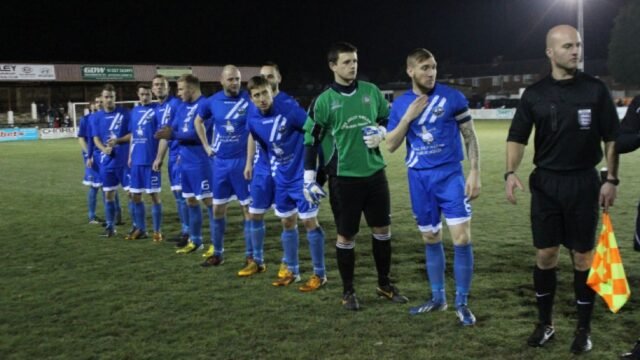 From the Archives: Chorley v Colls, 2013

Atherton Collieries were knocked out of the Lancashire FA Trophy on Tuesday night at Chorley despite taking the lead against a team who play three divisions higher. The Atherton outfit left Victory Park feeling aggrieved at some decisions in the match but can once again hold their heads high and take positives into their next match at Eccleshall on Saturday.

From the off it was evident that Colls were keen to play their usual passing game, which has earned them much praise from many admirers this season. A Chorley defence which contained a mixture of youth and experience – in the form of former Blackburn and Bolton player Matt Jansen – found it hard to cope with the pace of Gareth Peet and Paul Atherton who made a nuisance of themselves all evening.

Colls took the lead on thirteen minutes through a fast flowing counter attack which saw Chorley fail to get back in enough numbers. Jake Patton spread the ball out to the left hand side to Paul Atherton who had ample time to pick his spot in the bottom right hand corner.

Gareth Peet had a chance to double the lead minutes later when the same style of attack saw Colls attacking down the left. Peet easily beat a nervous looking Chorley defender before firing the ball marginally past the right hand post.

Half time arrived and called an end to what had been a positive performance from the away side. The second half produced more of the same, and again Colls came close to scoring. Mark Truffas fired a corner in from the right and Paul Atherton was left unmarked but unable to connect to the ball. If he’d have got purchase on the ball it would have ended up in the back of the net.

The home side were organised in their defending and attacked in numbers but were unable to create many clear cut opportunities in front of goal. This however soon changed when two quick goals took the Magpies ahead. The referee awarded Chorley a soft free kick on the edge of the area. Darren Stephenson got a touch on the ball in and it slipped under Joe Brobbin’s body before nestling into the net. This was in the 52nd minute.

Five minutes later and the comeback was complete in further controversial circumstances. A melee in the goalmouth left a player on the floor with a head injury. Both sets of players had stopped, expecting play to be halted, but the referee waved play on allowing Simon Wiles to place the ball into the top corner. It should also be noted that goalkeeper Brobbin was fouled whilst attempting to catch the ball in the lead up to the goal.

Colls looked more likely to score the next goal, but found themselves further behind when Kieran Halliwell unfortunately passed into his own net from close range. It was one of those things that nobody could do anything about as Steve Pilling’s men continued to stick to their game plan. Atherton were playing with a confidence of a Northern Premier League side, but were unable to register the goals which they’d have thoroughly deserved.

Mitch Leece was introduced to the game late on and made an almost immediate impact, pulling a goal back on 90 minutes after beating the Chorley backline for pace.

The wind was now in Atherton’s sails and they can count themselves extremely unlucky not to have been awarded a penalty in the last minute of added on time. With the home faithful begging the referee to blow the final whistle a free kick was launched into the area. Looking to make up for his aforementioned mistake, Halliwell rose above everybody and headed towards goal. Rising up with the Colls centre half was a Chorley defender who handled the ball away to safety. The ref nonchalantly shrugged off loud protests.

It was a ‘Cup Final’ performance to be proud of. There were many positives to take out of the match for Saturday’s trip to Eccleshall which is the first of twenty cup finals. The only dampener on the evening was the news that Daryl Patton sustained a groin injury in the warm up. We may have to wait another few weeks to see our infamous trio of brothers play on the same pitch.