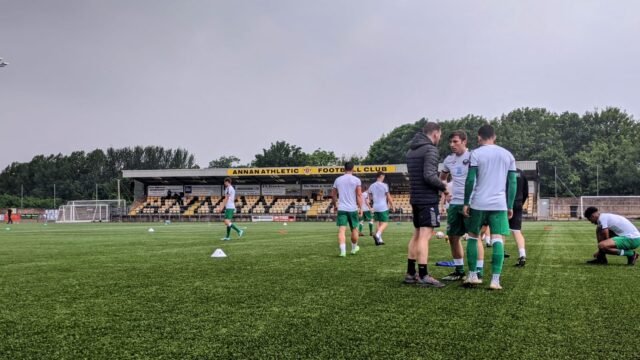 In their first pre-season outing ahead of the 2021/22 campaign, Atherton Collieries were beaten 1-0 away in Scotland at Annan Athletic.

Iain Anderson’s first-half goal was enough for the home side to claim the victory in Colls’ inaugural trip to Scotland.

After a cagey start to the game with both sides finding their feet, the visitors took the lead through Iain Anderson in the 17th minute.

With the ball bouncing around in the area from a long throw, Anderson prodded home past an onrushing Danny Taberner from close range.

Steven Swinglehurst headed over for the home side before the Black and Whites were presented with their first real chance of the match, Annan’s keeper picking up the ball from a backpass in his area.

From the indirect free kick, Dylan Glass hammered the ball towards goal but saw his shot cleared away after numerous deflections on the goalline.

Before the break, Brad Cooke’s men had the ball in the back of the net and should have been level, but the offside flag denied Elliot Rokka. The forward had put the ball into the bottom corner of the net having received it from Glass.

Half-time came however, a goal down to Annan who have been playing up until May this year, and next week start their league campaign.

Taberner made a superb save from close range to deny Chris Johnston following the restart, and Brad Cooke then made changes to his side.

Cusani then looked to have created a goalscoring opportunity again, beating 2 men on the left wing and surging into the box, but his pass across goal was blocked behind for a corner and cleared away.

Colls were on top and were unlucky not to equalise again through Joel Amado this time around. Amado glanced wide from a corner.

Myers also headed wide, that coming after Annan’s Aidan Smith did the same from no more than 5 yards out with an open net to aim for.

Unfortunately for the Colls, their pressure continued to build on the opposition’s goal but no goals followed. As the full-time whistle was sounded, Annan took the victory by a goal to nil.