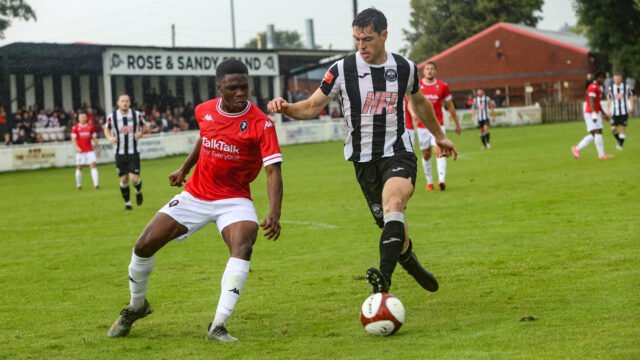 Salford City fielded a strong starting 11, and it took just 4 minutes for the visitors to make their mark on the game. After the Colls defence fail to clear the visitor’s corner, veteran striker, Ian Henderson heads it home from within the six-yard box.

Salford’s bright start continued, dominating the ball with their short passing. Colls sat deep in an attempt to block their onslaught.

The visitors nearly capitalised on another corner on the 12 minute mark, with Salford centre-back, Jordan Turnbull, heading over the bar with a free header.

It was just four minutes later when the visitors doubled their lead. Again, the Colls backline failed to clear a corner, and after a bit of pin-ball in the box, Ian Henderson trickles in his second goal of the game.

Colls soon started to find their feet. On the 25 minute mark, Marcus Cusani danced through a couple of challenges on the right-side of the penalty area to force a corner. Salford subsequently clear the danger.

Elliot Rokka and Trialist on both wings started to see more of the ball as the half wore on, creating various half-chances for themselves and Marcus Cusani up top.

A decent chance did fall to Colls 5 minutes before half-time. Trialist dispossessed Salford’s left-back, Ibou Touray, in their half and plays a slick one-two with Cusani. Unfortunately for the visitor’s trialist keeper anticipates it and snatches it away to deny the chance.

The referee blew for half-time, Ian Henderson’s brace the difference between the two sides.

As many teams higher in the football pyramid do during pre-season, Salford City decided to change their whole lineup for the second half.

Colls continued where they left off in the first half. Clive Smith, getting forward and providing width on the right-hand side, put in a great cross for Elliot Rokka who was so close to getting his head on it. Rokka then had another sight of goal moments later with a free-kick, his low drive narrowly wide of the keeper’s left-hand post.

It was Jack Lenehan’s turn to get in on the act. Showing a great piece of skill at the edge of the box, only for his shot to fall straight into the keeper’s gloves.

As Colls legs began to tire, the visitors started to find their rhythm again. Salford’s flair man, Brandon Thomas-Asante, dinked the ball into the penalty area which was met by Luke Burgess. Fortunately, his header is just wide of Danny Taberner’s left-hand post.

It didn’t take long for the same two players to combine again for Salford. Thomas-Asante evades two challenges near the halfway line and takes the ball into Colls’ half before playing a delightful through-ball to Burgess who dinks it past the onrushing Taberner to make it 3-0 to the visitors. A goal of the highest quality by a tough opposition.

As the final whistle was blown, the Colls faithful showed their appreciation to the players. Despite the score-line, Colls performed with grit and determination against a very tough opposition. We would like to thank Salford City for coming down to the Skuna Stadium and we wish them the best of luck for the season ahead.

For Colls’ next fixture, we welcome our good friends, Bolton Wanderers on Tuesday 13th July, kick-off at 7:45pm. Keep an eye on our social media channels for ticket information, we can’t wait to see you there supporting the lads once again!