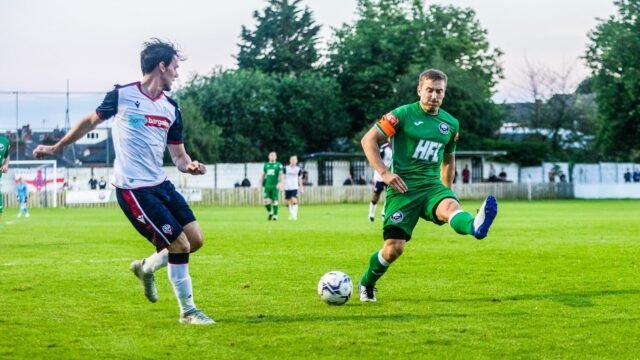 This was the sixth iteration of the fixture in as many years, with relative success on Colls’ part, securing four draws. Unfortunately for the hosts, this time it wasn’t to be, with Bolton securing a 4-0 victory in front of a sell-out crowd.

Despite the full-time result, Colls made the Whites work hard for their victory.

The opening stages of the game saw Bolton dominating possession without creating many clear-cut chances. Colls sat back into a very well organised defensive shape, making it difficult for the visitors to them break down.

Bolton’s first sight of goal fell to Declan John. The Welsh full-back connected cleanly with a volley at the edge of the penalty area that looked to be heading in if not for a heroic block from Clive Smith.

Shortly after, Bolton seemed to click on the attacking front. Danny Taberner was forced into making some good saves to deny attempts from ex-West Ham winger, Dapo Afolayan, and academy graduate, Harry Brockbank.

Colls offered little threat on the Bolton goal. Just minutes before half-time, Marcus Cusani made a dangerous run and earned Colls a corner. Unfortunately, the hosts couldn’t take advantage of the opportunity.

As the referee sounded the whistle for half-time, Colls definitely went into the break the happier of the two sides. Keeping an almost full-strength Bolton side to a goalless half is by no means an easy feat.

As many teams higher in the football pyramid do during pre-season, Bolton decided to change almost their whole lineup for the second half, with loanee winger, Xavier Amaechi, the only member of the starting eleven to continue in the second half.

Despite the ten changes after the break, it didn’t take long for the visitors to click into gear on the attacking front.

The majority of Bolton’s joy came down their right side. The partnership between Welsh duo, Gethin Jones and Lloyd Isgrove down the Whites’ right-hand side had been integral to their run to promotion during the 2020/21 season, and you could see their link-up play proved effective in creating some excellent chances.

As the half wore on, the fitness levels of the home side started to slowly dwindle. Danny Taberner continued to keep out Bolton’s best efforts for large periods, denying a strong effort from Kieran Lee.

With just 20 minutes of the game remaining, Bolton’s sustained pressure finally paid off. Some excellent passing play allowed Wanderer’s right-back, Gethin Jones, to get in behind the Coll’s backline to fire in a low cross to George Thomason who turned it in from six yards.

Just two minutes later, the visitor’s doubled their lead through Nathan Delfouneso, who converted Liam Gordon’s cross from the left from close range.

Bolton’s confidence continued to grow. Lloyd Isgrove went close to making it three but another brilliant save from Taberner denied the low drive.

In the third minute of injury time, Bolton’s Ronan Darcy, who had been a constant threat all half, added the third goal with a neat finish from inside the box.

Overall, despite the visitor’s dominant performance, the scoreline felt a little harsh for the home side’s overall performance. An excellent defensive performance against the strongest opposition faced so far in pre-season.

A special mention goes to the Colls and Wanderer’s faithful, many of whom hadn’t seen their side play in over 18 months. An excellent evening all round.

Colls’ face Huddersfield Town for their next outing on Tuesday 20th July, kick-off at 7:30pm at the Skuna Stadium. As always, keep an eye on our social media channels for ticket information. We can’t wait to see you back supporting the lads once again!