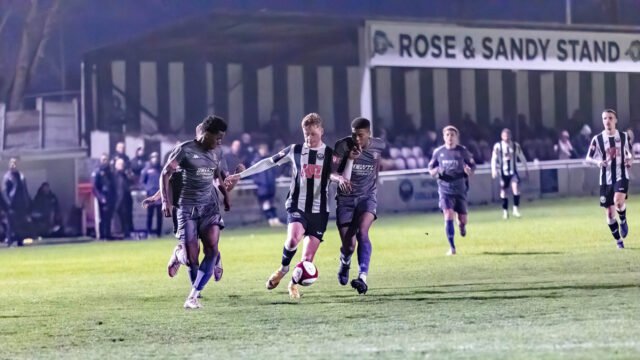 Atherton Collieries took a point after a dramatic game at Weaver Stadium, with James Hooper netting a brace on his full Colls debut.

It was a tale of two strikers, as Nantwich’s Joel Stair put the home side ahead before Hooper struck twice to give Colls the lead. With Collieries heading for win, Joel Stair struck again deep into injury time to see the sides settle for a draw.

It was the home side who struck first on a blustery afternoon in Cheshire, Joel Stair left unmarked from a corner and heading home from close-range. Colls almost equalised from a corner of their own, James Hooper almost catching the keeper out with a curling delivery to the near post.

Marcus Cusani was the next to threaten in front of goal, cushioning down a header from Luca Defreitas-Hansen, turning and striking narrowly over. A deep ball from Aaron Smith then found James Hooper running in on goal but his touch evaded him as the keeper ran out and cleared.

Danny Taberner produced a smart save to push away an effort from Akiel Raffie before Sean Cooke fired a volley narrowly over the crossbar. Aaron Smith had the ball in the back of the net before half time, however the offside whistle put a halt to any celebrations.

It didn’t take long into the second half for Colls to find their equaliser, James Hooper capitalising on a poor defensive clearance and and slamming the ball home in off the post. With the front three combining well, Marcus Cusani then slipped in Aaron Smith, however his effort was blocked by the defence.

There was then controversy as Gaz Peet got the better of his man in the box and was brought down by a heavy challenge. Despite strong appeals for a penalty, the referee awarded a free kick the other way, waiting several minutes to book the injured full back for his troubles. At the other end, Danny Taberner produced an extraordinary diving save to deny Matt Bell with an effort from distance.

Colls second goal would come with less than fifteen minutes left on the clock, Gaz Peet once again jinking his way into the box and seeing a low-effort spilled out by the keeper. James Hooper showed great composure to adjust his feet and the roll the ball into the bottom corner, serenaded by the Colls faithful as he wheeled off in celebration.

Following the goal, the home side piled on late pressure with Joe Robbins seeing a long-range strike deflected onto the post via Luca Defreitas-Hansen. Deep into injury time, it was Joel Stair who popped up again, heading against the bar before poking home the rebound to take a draw at the death.