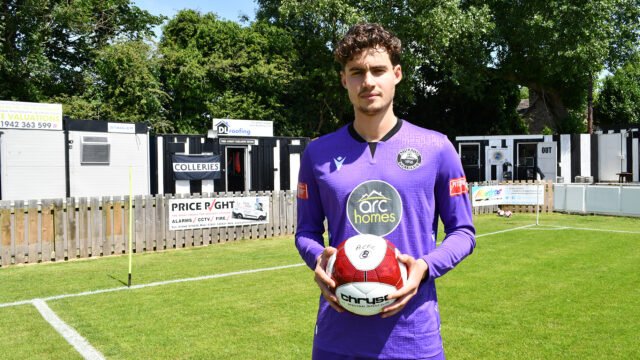 Atherton Collieries are delighted to confirm the signing of goalkeeper Nicholas Defreitas-Hansen, who joins the club from Swansea City.

The 21-year old goalkeeper moved to the United Kingdom to join Everton in 2017, where he spent 4 seasons before joining Swansea City in 2021. Nico has also amassed 9 caps for the United States u16s and 3 caps for Denmark u19s.

Nico is also, of course, the brother of popular Colls center half, Luca Defreitas-Hansen, and has been on trial with the club throughout pre-season.

Speaking on the signing, manager Brad Cooke said:
“I’m absolutely delighted with the signing of Nico! It wasn’t expected, we helped him find his feet after being released from Swansea, and after coming in with us he really enjoyed the environment, and he’s a player you simply just can’t turn down.”

“Nico has an unbelievable pedigree, with Everton, Swansea, the United States and Denmark, and for us to capture two exciting young professional footballers in the last week shows the progression of this football club.”

“I have no doubt that Nico will have a great career as a professional footballer. Thankfully, we will be part of that journey!”

We would like to thank Paul’s Workshop Supplies for sponsoring Nico for the upcoming season.