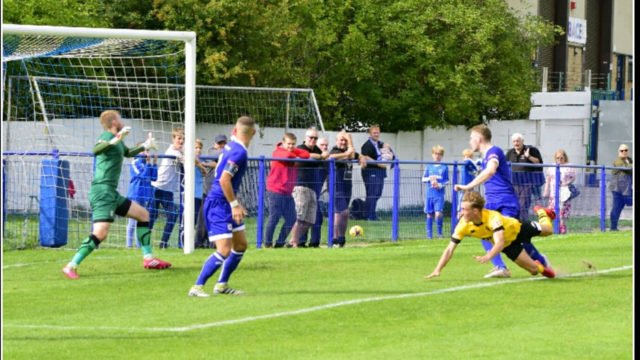 How The League Was Won Pt 1

The season started inauspiciously away at Glossop, a club that one still instantly associates with that MEN United cup final at Curzon Ashton where Colls were massively outnumbered on the terraces by the Wembley bound GNE fans. However the balance of power had changed and Colls ran out comfortable 2-0 winners, courtesy of a Ben Hardcastle brace. Early season hopes were high.

However the season quickly turned upside down as Greg Hartley was incorrectly dismissed in our opening home game just 2 days later. Dave Sherlock donning the gloves couldn’t keep a Colwyn Bay attack led by former Colls man Ash Woods out as ten men Colls fell to a harsh defeat. Hartley was involved in a dressing room injury that subsequently ruled him out for 6 weeks.

Next up at the Skuna were Ramsbottom United, they took full advantage of our goalkeeping woes to also leave with all three points. The pre-season optimism quickly subsiding, a hammering of Skelmersdale United only hinting at the potential Colls had when things clicked.

A turning point was our first ever win at Clitheroe, going in at half-time 3-1 down and all at sea, a stunning second half comeback saw us running out eventual 5-3 winners, the twin attacking Ben threat of messers Hardcastle and Conway a joy to watch.

The shock loss to Market Drayton Town in a game Colls dominated being contrasted by a comfortable win against play-off hopefuls Prescot Cables just two days later kept our feet firmly on the ground.

Similarly, an early Tom Bentham goal taking all three points from giants of the league Leek Town contrasted with a narrow home defeat to Widnes in a game of two penalties as Colls frustratingly missed theirs, in a theme that would run through the season.

Possibly our toughest test came at the start of December as we visited a reinvogorated Radcliffe team, Jon Macken’s team shutting out the Colls attack and plundering 2 goals on the break as we approached the Christmas period with absolutely everything to play for.

Another three points were taken from Glossop as Greg Hartley saved a very late penalty at 2-1 then in the mist of Trafford, Colls were denied a win by a late deflected Aaron Burns goal to give us our first draw of the season on Boxing Day.

The squad at this stage was looking at its strongest, Greg Hartley had returned, the rock solid Ian Rowlands recovered from injury, the problematic right-back berth filled by the ever reliable Clive Smith, Oli Roberts arrived from Buxton to add more quality to the midfield and the attacking options boosted by the return of James Kirby after a couple of seasons away. However numbers were the problem as assistant-manager Andy Heald made the bench at Shawe View.

The league was still there for the taking, none of the frontrunners looked to be able to pull off a consistent run of victories as the Colls we know and love finally arrived on New Year’s Day.