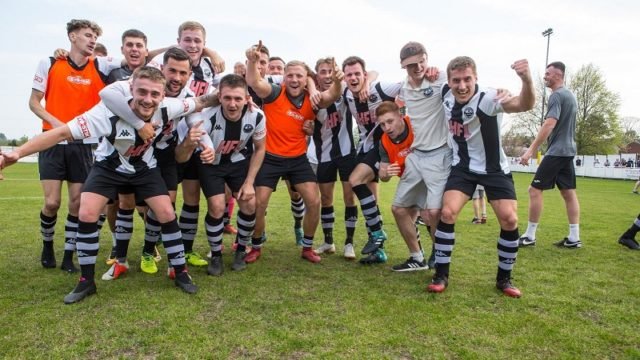 How The League Was Won Pt 2

A freezing Harry Williams Stadium on New Year’s Day 2019 saw Colls make a real statement of intent, facing a Ramsbottom side in the middle of a fantastic FA Trophy run. A second half performance where Conor Gaul then Tom Bentham and Ben Conway put the ball into Sam Ashton’s net really put the cat amongst the pigeons in the league. One of their fellow promotion chasing sides comprehensively put to the sword in front of over 400 people.

Two weeks later a visit to another promotion hopeful, Runcorn Linnets suffered the same fate as the Colls rolled into town and dismantled the home team, the usually vociferous Corn fans accepting the outcome with good grace. A Vinny Bailey free kick, another Ben Conway special and a goal of the season contender from a swivelling Ian Rowlands saw Colls return to the top of the table, a position they’d held previously but not with the same conviction.

Colls dished out a couple of heavy beatings to teams struggling with off the field issues, these games weren’t so pivotal in the season but one game worth mentioning is Tom Bentham’s six goal haul against Kendal Town. Certainly one for the record books and a result that did our goal different a world of good.

Next up on the road in our now famous yellow away shirts was another promotion chasing team, Mossley. The Lilywhite gave the Colls a real test on a very heavy pitch, again it was the second half of the game where Colls imposed themselves. The fitness work put in by James Eachus behind the scenes showing once again. The Colls fans were unusually huddled together, sheltering from the elements, this lead to a fantastic atmosphere and scenes that suggested that there was belief throughout the club that we may actually be able to win this league. Songs were sung about Ben Hardcastle being magical and world’s youngest Clive!

Late February however presented a bit of a wobble as Colls drew two successive games. Away to Droylsden we can perhaps consider ourselves unlucky as Oli Roberts hit the crossbar with a free kick, this would have gone in had the crossbar not drooped in the middle! At least it appeared that way. Then a 1-1 draw away at another promotion hopeful in Prescot Cables was a perfectly acceptable result but another 2 dropped points opened the door for the chasing pack. Such was the solidity of the defensive unit, Greg Hartley, Clive Smith, Danny Lafferty, Ian Rowlands and Gaz Peet, that James McCulloch’s headed goal for Cables was our second goal of the year conceded.

March was a big month, firstly Colne recovered from conceding first to leave the Skuna with all three points after Colls spurning chances to double the lead. Three games without a win was our worst run of the season! Our next visitors were Leek Town, the dark horse in the chasing pack due to games in hand. Ben Conway had departed to play football in New Zealand and had been a big miss, but the manager pulled a rabbit out of the hat with the loan signing of winger Connor Hughes from Curzon Ashton. And it was Hughes who opened the scoring against the Staffordshire side as Colls returned to winning ways.

A comfortable 2-0 win away at Market Drayton Town set up the biggest game of the season, as Radcliffe’s victory over the Runcorn Linnets the previous weekend when Colls had a free weekend meant it was first versus second at the Skuna. And a win for the Colls would have opened up a 7 points lead at the top of the table. It was billed (not by us) as our biggest game ever. A bumper 600+ crowd turned up for what for Colls fans was to be a slight anti-climax. A Tunde Owalabi shot was deflected to completely wrong-foot Greg Hartley and open the scoring. A late Colls penalty was put wide by Ben Hardcastle and Radcliffe moved to within a point. It was a tough week for all concerned, we felt that we’d been treated slightly disrespectfully by our visitors and one group of supporters in particularly appeared to be determined to cause trouble. Completely out of place and unnecessary. Wild claims were made of Colls being swept aside, however the league was still entirely in our own hands. Radcliffe then by virtue of a home win against Kendal moved to the top of the table, temporarily at least. This acted as a wake-up call.

Worse was to follow as we arrived at Widnes’ Halton Stadium, a strange setting for an Evo-Stik game with excessive stewarding killing any atmosphere. An abject first half performance led to an interval where the manager let rip, a week’s worth of frustration released! Whatever was said in there absolutely removed any remnants of a Radcliffe hangover and Colls ran out 2-1 winners, Jordan Cover heading an equaliser before Connor Hughes slotted away the winner as unbridled scenes of jubilation tinged with a touch of relief swept around the ground. Well the stand that was open anyway. The Colls were back, and a Monday night fixture at home to Newcastle Town presented the opportunity to return to the top of the table. The Castle couldn’t contain the Colls and the finish line was within sight.

A first half barrage against Clitheroe opened up the gap at the top of the table once again, and with Radcliffe this time having a weekend off, the pressure was well and truly on them. The tide turned conclusively when Jon Macken’s men were beaten on a Tuesday night in Colne, an early Alex Curran goal being enough for the Red Army to take all three point, with Colls fans glued to updates.

Two wins from the last three games would be enough, a visit to bottom team Skelmersdale was taken as seriously as any other game and three points were in the bag. It was now one win from the last two games required, with a four point lead still intact. Everyone at the club now just wanted it done, the pressure had been draining for all involved.

A massive crowd packed into the Skuna for the pivotal last home game of the season against Integro cup winners Trafford on a glorious sunny bank holiday Monday. Colls were frustrated at every turn and couldn’t break down the resolute defence of Tom Baker’s well organised team. However, as we approached injury time, word came in that Radcliffe had only drawn with Ramsbottom United, a point was now all that was needed. The ball was kept well and truly in the corner and as the final whistle blew, emotional outpourings filled the Skuna. The team were presented with the trophy by the league committee on the pitch, in front of their own supporters, what more could one ask for? The party outside the clubhouse continued until the sun went down!

All that was left was for the dead rubber away at Newcastle to be played out, two second half goals in 5 minutes from substitute Tom Bentham wrapped the game up and it was all back to the clubhouse for the end of season presentations. Taking 4 out of the 5 awards was a man who first joined the Colls in 2010 and had been on the journey since North-West Counties Division One, Sir Gareth Peet. The clubhouse continued to reverberate to the tune of “We’re On Our Way” until the early hours. What a season!