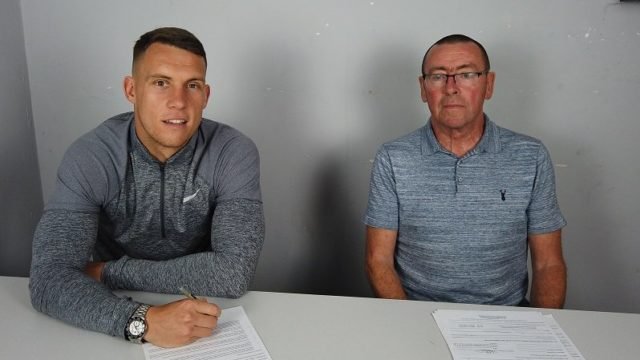 Next up to sign on for next season is our captain, Danny Lafferty. Nearly 10 years since making his debut for Colls, Danny gave us a quick interview as he looks forward to next season.

Danny, you’ve signed a contract already, pleased to get that done and dusted?

Yes, very pleased to get it signed nice and early, there was no other place I wanted to play my football other than Colls after the hard work we’ve put it over the last 2/3 years.

And looking forward to pre-season?

Pre-season can’t come quick enough now we’ve had a few weeks off and I’m just itching to get started again now and start the league games.

Another step up the ladder presents a challenge for the club, is that made easier by the fact it will largely be the same group of players?

I’ve said it plenty of times before but the group of lads we have is a top group. The spirit in the team is second to none, so it’s good to be going into a challenge like we are with these boys.

We know some of the clubs in the division but many are new opponents for the Colls, is there any fixture(s) you are particularly looking forward to?

I think the obvious game to look forward to is FC United but there’s some great games for us next season your likes of Ashton United, Stalybridge Celtic, South Shields, Hyde United and Nantwich Town, these are the teams we want to be testing ourselves against week in week out.