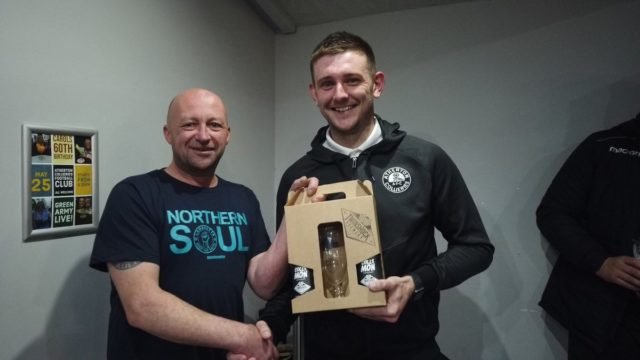 Dave made Colls debut on Saturday 17 October 2015.  He wore the no 10 jersey in the 4-2 home NWCFL Premier League triumph over Alsager Town. He had been on the local scene for ages and had played against us for Radcliffe Borough the season previous. He soon settled about his business and highlights of his first campaign included a hat-trick in the 7-3 away win at AFC Darwen, a last minute winner at Congleton Town which led to wild celebrations on and off the field and a late penalty save at AFC Liverpool which allowed to us to get out of Crosby with a unlikely point after we finished with just nine men on the park.

Yes Dave was Mr Versatile. Wherever Cleggy and then Brad asked him to play he did with selfless enthusiasm. When we had a keeper crisis for the Bacup FA game at the beginning of the 16/17 it was Dave who went between the sticks and helped us to victory. His main position was in the middle of the park spraying the ball about with giddy abandon and tackling everything that moved. The Colls faithful often winced in unison when he put a toe in. At times his tackles were later than a Northern Rail train in rush hour but they often had a galvanising effect on his team mates and raised £10 for the LFA.  He was a valued member of the squad which won the NWCFL Championship before he moved onto pastures new.

He tried his hand at Congleton Town and Charnock Richard but somehow didn’t quite latch. They must have had some good players to keep him out of the starting elevens. He dusted himself down, returned home and in fairytale style picked up an Integro NPL Challenge Cup winners medal. He had replaced the unfortunately injured Jake Kenny in the right back berth and in the few games he was used there he played like it had been his position for years. He then won a NPL Division 1 North WestTitle in 18/19. He went on loan to Colne at the beginning of 2020 and following the voiding of the season he has decided to call time on his Colls career. He made 145 appearances scoring 14 goals. An all round good effort from a player who will live fondly in the hearts of everybody at the Skuna Stadium.

Brad Cooke said “Dave has been a fantastic servant to the club who has literally played in every position. He is a great lad who didn’t miss a training session and is vastly underrated. It was a pleasure to play alongside and although it was only for a short time it was also a pleasure to manage him. He leaves with his head held high and I wish him nothing but the best”.