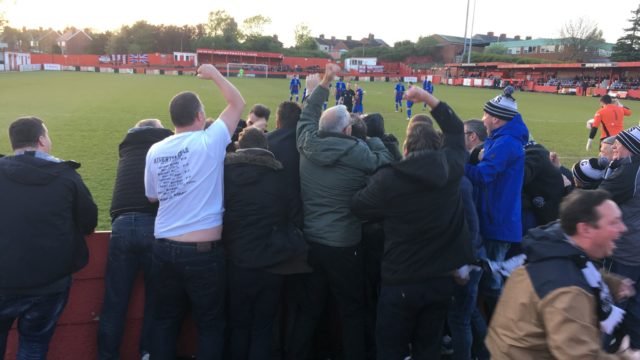 Over the next few days/weeks/months we are going to be sporadically putting a bit of content on the website to keep our hand in these crazy times. We came up with an idea of looking through our photo library and reproducing a few ‘iconic’ pics with a brief narrative to add garnish.

The first Wednesday of May 2018 saw a convoy of buses leave Atherton for an evening game in the town of Alfreton, Derbyshire. It wasn’t a run of the mill end of season going through the motions affair – it was the NPL Integro League Challenge Cup final against top flight Coalville Town.

Both teams had achieved wonderful semi final results, we had won 4-1 at fabled non leaguers Hednesford Town, whilst The Ravens had beaten the booming South Shields on their own midden. A good, close showpiece was anticipated by the pundits.

On eight minutes, a Sir Gaz Peet corner was headed in at the far post to give us the lead. The picture shows the aftermath of the ‘yedder’. The virtually unsighted player ran to the Colls contingent and the celebrations began. When the player disentangled himself from the adoring supporters there was a collective sharp intake of breath from the boys and girls behind the goal.

The scorer was Josh Messer and it was a surreal moment. He was playing his 150th competitive game in black n white stripes and in his previous 149 outings he had bagged nil goals. Match commentator Christian Hadjar from Bolton FM summed the moment up perfectly “Goodness gracious, it’s Josh Messer”.