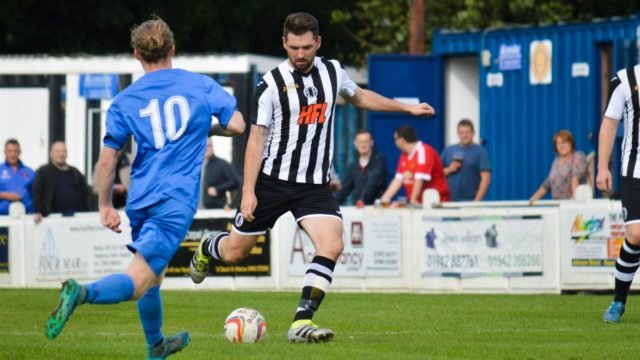 Earlier this week Matty Grimshaw and Dave Sherlock announced they were leaving the club after years of loyal service. Over the next  couple of days we will pay tribute to their enormous contributions.

Matty Grimshaw made his bow in black n white stripes on 21 December 2013 in a NWCFL Division 1 home fixture against Rochdale Town. Despite a Paul Atherton brace the visitors took the spoils 4-2 in front of a crowd of 54. He was signed by Steve Pilling after a spell at Salford City but he made his name as a part of the well oiled Hindsford machine which had terrorised the Manchester League for years and years.

In that first campaign Grimmy succumbed to injury so his opportunities were rather limited but when Michael Clegg took charge in the 2014 close season he became an integral part of the squad made up of local talent. The ball playing centre half made a total of 164 games for the club scoring 9 goals. He won three championship medals and three cup winners medals while also picking up a Crazy Gang Supporters Player of the Year award. He would have made many more appearances but for the odd frustrating injury. He only played 54 minutes of this truncated campaign, the injury on the opening day at Ashton United kept him away from the paddock. Nevertheless in true Matty style he didn’t miss many games and was a constant source of encouragement to the lads.

He was even interim manager for the Ashton Athletic Lancs Cup victory – a 100% win ratio. An unenviable record! I personally will never forget his stint between the sticks at Hanley Town in April 2014 which proved conclusively there is above one talented goalkeeper in the Grimshaw family. I will also miss the synchronised ‘Get Grimmy up front’ shouts from the terraces when we needed to chase games late on.

Brad Cooke said ” Grimmy is a gentle giant, an absolutely top bloke who played with me prior to Cleggy coming in. He has been top drawer on and off the pitch, although game time has been limited in the past couple of seasons his presence behind the scenes has been just as important. He has a great footballing mind and I am sure he will continue in the game when the time comes to gang up his boots. We both agreed the time was right for him to take in a new challenge. Someone is getting a great lad and a top player. Good luck big man”