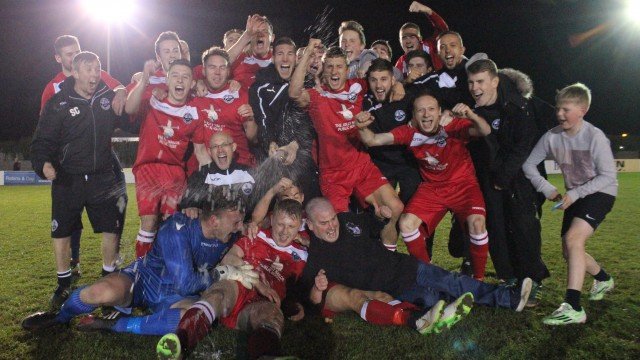 No rest for the wicked

About 9pm on Saturday 11 April 2015 the black n white stripes returned home from deepest Barrow with a rather fortuitous 3 points. Two late goals from supersub Mark Battersby (his 58th and 59th of an A++++++ campaign) had secured the win at Holker OB. The lads finished the evening with a celebratory pint or two in The Rope as they chewed over the week of the football ahead. You will have to admit their schedule wasn’t for the faint hearted.

Tuesday 14 April – An evening at home thinking about football.

Wednesday 15 April – D Day at Cheadle Town. Victory would ensure the NWCFL Division 1 title. Given the potential prize it was a nervy, cautious display. A Mark Battersby penalty was soon cancelled out and it was stalemate at the interval. The second was equally as tight but an unlikely hero stepped up to the plate. A corner was nodded on to centre half Luke Gibson who volleyed home from about twelve yards out. Scenes. Minutes later the ref blew the final whistle and then the proper scenes commenced. Tears and hugs of joy. Atherton Collieries – Champions. A late night drink in The Rope ensued.

Thursday 16 April  – Bolton Hospital Cup action. This was a voluntarily entered bespoke local competition and the fixture couldn’t be scheduled for any other date. Eagley were the visitors who almost stifled an understandably under the weather Colls attack. Two late goals by Jordan Cover eventually sunk his old club.

Friday 17 April – A match too far. The cavalry was replenished somewhat but you could tell nobody wanted to be in sunny Darwen. Gaz Carson missed a penalty and our hosts led 2-0 at the interval. That lead never looked being added to or challenged in the second half. Only the second league defeat of the season but nobody really cared.

Saturday 18 April – A 3pm KO at Ashton Town.  Less than 24 hours from the last outing.  Granted it was nigh on totally different starting eleven but you could see the lack of enthusiasm from the boys. Somehow they led 2-0 but ultimately sloppy play allowed Ashton to snatch a point. Nobody really cared. An incredible, herculean six games in eight games had been completed. The players, management team, committee and supporters were fatigued and would have ended the season there and then despite at least two cup finals still to play for.

No chance of that mind as there was a game at Daisy Hill just over forty eight hours later. No rest for the wicked!