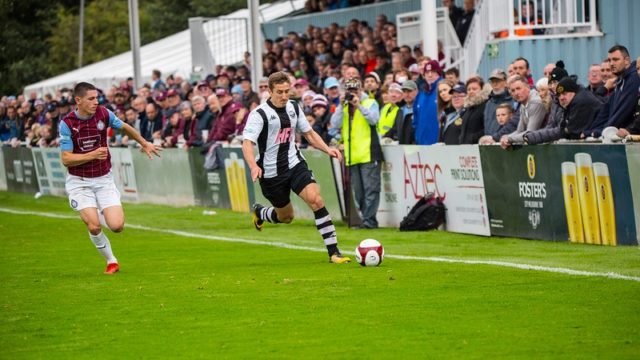 With the postponement of consecutive home games due to weather and opponent’s FA Cup commitments, Colls were back in action, away from home again. On the road to the north-east for the first of two visits during the month of October, visiting the league leaders and overwhelming favourites to take the title, South Shields. The mood in the camp was overwhelming positive with no expectation on shoulders, in a game played in front of 1752!

Colls setting up with new midfield paring of Micheal Brewster and John Welsh, the team focused on frustrating the home team. The plan nearly came undone twice in the opening exchanges, David Foley crossing for former Bolton frontman Sanmi Odelusi to prod wide on 7 minutes and centre back Gary Brown poking just wide on 16 minutes as Colls’ keeper Ollie Byrne spilt the ball from a corner.

Colls began to settle into the game and Jordan Cover had his first sight of goal on the twenty minute mark when Vinny Bailey played a ball down the channel, Cover cutting back but seeing his shot curl away from the goal.

Maybe lulled into a false sense of security, the Colls defence was unpicked on 28 minutes as no.10 Robert Briggs dropped into the pocket between the lines. He was able to collect the ball and lay into the path of Foley. His first touch wrong footed Danny Lafferty, enabling him a pick his spot and open the scoring.

Almost immediately Jordan Cover had Colls’ best chance of the half as he got in behind the defence only to be denied by the recovering run of Gary Brown. The subsequent corner coming to nothing as the keeper plucked the ball out of the air with ease.

Worse was to come on 38 minutes as an Adam Thurston cross from the left cleared Lafferty and Josh Thompson, Odelusi connecting with a particularly low diving header which looked to have suspiciously also struck his arm on the way in. The referee waving away all protests as the goal stood.

The game was put to bed soon after the half time break as a prolonged spell of Shields possession lead to Thurston springing the offside trap and cutting back for Foley to complete his man of the match performance and slot home from close range to make it 3-0.

Colls still had chances to grab a consolation as Cover again broke through and again was denied by Brown as he appeared out of nowhere to block the shot, then substitute Kieran Feeney made the most of Ben Conway ball to test keeper Myles Boney.

Shields exhibited their superiority by bringing Jason Gilchrist off the bench, the forward averaging a goal every other game in higher divisions. And Gilchrist nearly grabbed what would have been the icing on the cake as a Bryne clearance stuck him but fortunately bobbled out for a goal kick.

With the final whistle came the news that Whitby Town had conceded a last gasp equaliser in the FA Cup meaning they’d be on the road to Gloucester City for the replay rather than visiting the Skuna on Tuesday night. Colls’ next fixtures will be away to Gainsborough Trinity next Saturday followed by another trip to the north-east the following Tuesday as we visit Morpeth Town before finally returning home for the league clash with FC United of Manchester on 19th October.