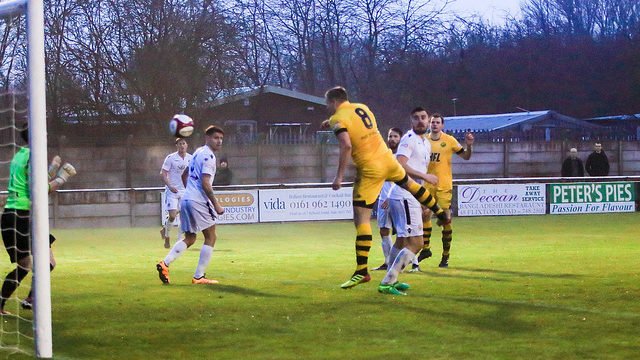 Tonight, Colls return to Shawe View, Trafford, for our final away friendly of pre-seaon. Our next time on the road will be for the season opener at Ashton United on 17th August.

Our last visit was on Boxing Day, a game played in a descending fog, the game finishing 1-1 in a scene reminiscent of Victorian London. Tom Bentham had opened the scoring early in the second half before a late Aaron Burns shot was deflected to wrongfoot Gregg Hartley and level the scores.

Trafford were of course our vistors for our final home game of last season, when the Division One West title was finally clinched. Tonight offers us the chance to thank Tom Baker and the rest of the club for their exemplary attitude that day.

The North tailed off at the end of last season, and despite lifting the Integro Cup at FC United’s Broadhurst Park, with former Colls Mon Adam Farrel bagging one of the goals, they missed out on the end of season play-offs. We fully expect them to be in the mix this season.